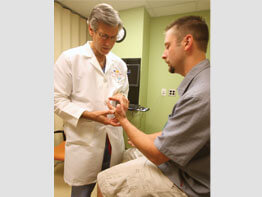 For some, psychological scars can be as difficult to treat as physical wounds.

Both sides of that dynamic are treated at the recently opened National Burn Reconstruction Center at Good Samaritan Hospital.

The unit opened last February, when Dr. Robert J. Spence, a pioneer in the use of plastic surgery to treat burn victims, moved his practice to Good Samaritan from Johns Hopkins Bayview Medical Center.

What was it about the institution in northeast Baltimore that attracted him?

“I really have two big interests in medicine,” Dr. Spence said. “Obviously, burn reconstruction is one of them. The second is rehabilitation, and Good Samaritan is famous for its excellence in rehabilitation medicine. That was the main thing that drew me.”

Dr. Spence leads an eight-person team that includes Lori Taguding, a program coordinator who moved with him from Bayview to Good Samaritan; physical and occupational therapists; social workers, and Dr. Stephen Wegener, the Burn Unit’s director of rehabilitation psychology.

Dr. Spence has been a presence in Baltimore since 1965, when he left upstate New York and enrolled at The Johns Hopkins University at a time when students could complete their undergraduate studies and medical school training in seven years.

A seminal 1960 work first exposed him to the psychological vulnerability of burn victims, which he referenced with a horror film villain.

“When I was studying how to repair congenital deformities, like cleft palates, Frances McGregor’s writing about the psychological effects of facial deformity really impressed me,” Dr. Spence said. “She wrote about patients getting on the bus and adults changing seats. Children will start crying, because we’re taught from a very early age that normal appearance and beauty is good, and deformity and abnormality is evil.

“Freddy Krueger is the obvious example.”

Caring for that aspect can add to the arduous treatment of burn victims, in which the doctor-patient relationship can last decades. One 17-year-old woman has seen Dr. Spence since she was injured at age 3.

He has been treating Michael Gross since March 2005, when the electrician received burns over one-third of his body. Compounding his on-the-job injuries, the incident occurred in a cement factory, where he breathed in dust that burned his lungs.

Unconscious for 15 days and in need of heart resuscitation at one point, Mr. Gross, 30, awoke to the news that his wife, Lisa, was expecting. Michaela, his “angel,” is approaching age 3. He makes frequent trips from his home in Greencastle, Pa., to see Dr. Spence, who has performed 13 surgical procedures on Mr. Gross.

“I was back to work within three months of leaving the hospital,” Mr. Gross said. “The psychological staff wanted to know why I was so strong, but I’ve always been a positive person.

“Dr. Spence could sense that confidence. I have a comfort level with him. He’s straight with me, tells me what I need to know and offers the best solutions.”

Dr. Spence, 61, has taken the digits that once handled a basketball for the Johns Hopkins varsity and applied them during a career that has taken him from the National Cancer Institute to the University of Maryland Shock Trauma Center to Johns Hopkins Bayview, and now Good Samaritan.

“I’ve always been good with my hands, and I knew I wanted to be a surgeon,” Dr. Spence said. “I spent a lot of time with plastic surgeons at Hopkins, and I like the idea of reconstruction.”

He was eager to correct a misconception.

“Most people think it’s called plastic surgery because you put plastic in things,” Dr. Spence said. “It comes from the Greek word to shape and mold, as you are shaping and molding tissues.”

That pliancy comes in many forms.

“Teaching patients to be patient is vital,” Dr. Spence said. “In a burn reconstruction center, all of our patients are outpatients. You do all the work after burns have closed and the patient has gone home. If you rush in two or three months after an injury and start operating, you’re interfering with the rapid build-up of scar tissue, and your operation may not have as good a result.”

To that end, Dr. Spence has done groundbreaking work in several areas, including the use of synthetic skin and tissue expanders, which grow more normal skin that can be used for donor sites for flaps and grafts. The normal skin replaces burned, scarred skin to improve appearance or function.

In one recent article, Dr. Spence shared his approach to major facial burn reconstruction. One principle: rather than cutting out and replacing just the burned area, which would leave the impression of a patch, he often replaces entire “aesthetic” units, areas of the face that are separated along normal anatomic lines, such as the upper lip or an entire cheek.

“Some of these patients are terribly injured, and areas that have been destroyed need to be reconstructed,” Dr. Spence said. “I always feel the patients who can be helped the most are those who have true deformities. That’s become my real interest.”