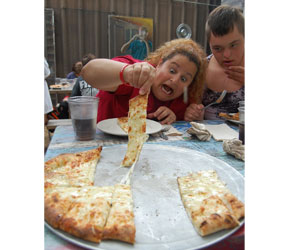 Encouraged by her mother, 17-year-old Johanna Romero de Slavy decided to volunteer as a counselor at Camp Jabberwocky in picturesque Martha’s Vineyard, Mass. It was to be for her a life-changing experience.

That was 22 years ago, and ever since, the Good Samaritan Hospital nurse has devoted a month of every year to give support and joy to hundreds of campers at that “very special place” established 59 years ago, making it the longest running overnight camp in the nation for people with disabilities.

“I arrived at Jabberwocky as a young, unsure woman and left transformed with a new appreciation for human life,” de Slavy said. “After earning my nursing degree, I knew I wanted to share my Jabberwocky perspectives for the rest of my life.”

For the parishioner of St. Rose of Lima in Brooklyn, her experiences “have directed how I now practice in my nursing career.”

“I have learned the importance of listening to my patients and being their advocate when no one will listen,” she said. “I have learned to appreciate every single moment with my patients, and to place their needs above everyone else’s.

“I have learned the meaning of therapeutic touch, and how body language can impact the human soul. I have learned not to judge people by their looks and to be accepting of others. All these views were guided by my many experiences with my family at Jabberwocky. It is through every experience at camp that I continue to learn and grow as a person”

As its now many proponents insist, Jabberwocky lives well beyond the borders and definitions of camp. It may have all the outward appearances and necessities of any summer camp, but as de Slavy said: “step into this curious microcosm and the images of a camp quickly fade.”

“Jabberwocky, though, is a different culture. It is a place where disabled folks are at the center of a community rather than at the periphery,” said the Good Sam nurse.

“I wasn’t sure what to expect, but the counselors and the campers were all so nice and caring and I found there a wonderful family atmosphere.”

It was, she said, “a remarkable and fulfilling experience to feed someone, to dress someone, to bathe someone, and to take them to the beach. It was a lot of work, but it was so rewarding.”

A former Sunday school teacher at St. Rose of Lima, de Slavy said her experiences at Camp Jabberwocky have reinforced her religious faith and her faith in what just one person can do to help those in need.

“Sometimes I think I benefit more than they do,” she said.

de Slavy, who recently earned her master’s degree in nursing education from Notre Dame of Maryland University, said she hopes that more people will become aware of and support the non-profit efforts of Camp Jabberwocky.

More information can be found at campjabberwocky.org.