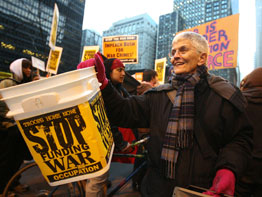 WASHINGTON – In the pouring rain March 19, Franciscan Sister Marie Lucey addressed several dozen protesters at a rally near the White House, pleading for an end to U.S. involvement in the Iraq War.

The Washington rally was just one of several events held across the country that day to mark the fifth anniversary of the start of the U.S.-led military invasion of Iraq.

About 1,000 protesters spread throughout Washington for a day of marches, rallies, sit-ins and blockades. Although the turnout was smaller than usual for Iraq War protests in Washington, similar events in Chicago, New York and San Francisco drew bigger crowds.

But no matter how many people attended various peace rallies, Catholic activists who are involved said they are in it for the long haul.

Sister Lucey, associate director for social mission for the Leadership Conference of Women Religious, told rallygoers she had been amused by a quote she had read in the newspaper that morning by a college student who said, “The (peace) movement is ours, too, not just that of old white women.”

“I am thrilled that young people have claimed their voice in protesting this war, and as one of those old white women, I am glad that I, and the Leadership Conference of Women Religious, began to publicly decry the war even before it started,” she said.

Sister Lucey, who recently was part of a delegation visiting Iraq War refugees in Syria and Lebanon, told Catholic News Service March 20 that although it was “not new” for Catholics to speak up against war it was important that they continue to “make that voice stronger and louder.”

“We have to continue to be actively involved to bring the war to an end,” she said.

Johnny Zokovitch, communications director for Pax Christi USA, said there continues to be a steady increase in the number of Catholic peace activists “the longer the war goes on.”

“People who were neutral at one point are taking stock of the human and economic costs of the war,” he said, noting not only an increase in activism, but also more concrete steps taken to promote peace such as prayer services, lobbying efforts and letter-writing campaigns.

“There is a really strong and vibrant movement now,” he said, speculating that it might be a counterbalance to the current administration, which does not “seem to weigh public opinion” when polls show U.S. citizens are against involvement in the war.

“It puts the impetus on us to explore alternative avenues,” he said, noting that activists are beginning to build a broader base and join forces with those from other faiths and secular groups.

The strength of today’s peace activists lies in their strategies, according to James Salt, organizing director of Catholics United, a nonpartisan group that promotes the principles of Catholic social teaching in political discourse. Last summer Catholics United launched a spin-off group called Catholics for an End to the War in Iraq.

Salt told CNS that activists are “more strategic today than they were 30 years ago,” especially in using modern technology to get out their message. For example, the new initiative against the war has already collected 20,000 petitions on the Web site www.catholicsforanend.org. and at local church gatherings.

But signatures alone don’t tell the full story of how American Catholics stand on the war.

Gerard Powers, director of policy studies at the Joan B. Kroc Institute for International Peace Studies at the University of Notre Dame in Indiana and former director of the U.S. bishops’ Office of International Justice and Peace, noted that more people mobilized against the war in Iraq in the years leading up to it than they have recently.

Since the U.S.-led intervention began, he said, “the moral question has changed,” making continued U.S. involvement, and its public support or disapproval, more ambiguous.

“Now we’re in a moral conundrum,” he said, referring to the U.S. “responsibility to the Iraqi people” and possible threats to stability that an immediate troop withdrawal might cause.

Brian Terrell, a member of the Catholic Worker movement and director of Catholic Peace Ministry in Des Moines, Iowa, feels no ambiguity about U.S. involvement in the Iraq War.

On March 19 he joined about a dozen protesters who placed an empty coffin draped with a flag in front of the entrance of the Army recruiting office in Des Moines, forcing it to shut down for about 40 minutes. Two protesters were arrested.

Terrell, who has been a peace activist for more than 30 years, still firmly believes protesting is the right thing to do, but he also adds that “it’s not easy” and he is “getting really tired.”

He told CNS there is not as much antagonism against protesters as there used to be, “but it seems more shrill” these days, particularly because of those who say “How dare you show disrespect for your soldiers or your country.”

Terrell said he is energized especially by others involved in similar acts of protest across the country, including friends who were arrested March 19 for praying the rosary in a federal courthouse in Worcester, Mass., as part of a war protest.

“Being silent is just impossible, as hard as this is,” he added.

He thinks the Catholic peace movement has grown in three decades, despite the often small turnout at rallies and protests.

“It’s harder to get a big crowd for a parade,” he said, “but more people are making serious acts of resistance.”