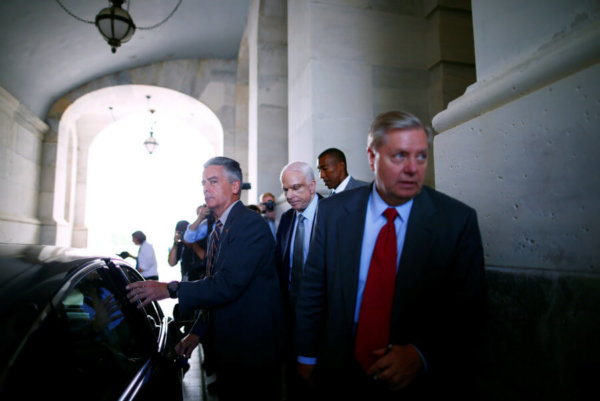 WASHINGTON —When the vice president has to cast a vote to break a tie in the Senate on whether to debate U.S. health care policy, let alone revise it — as Mike Pence did July 25 — it is obvious that passing legislation to repeal, and/or replace, and/or reform the Affordable Care Act is going to be a heavy lift in Congress.

Democrats, who boasted of a veto-proof majority to avoid a Senate Republican filibuster, got the ACA passed in 2010. Now, they’re in the minority in both the Senate and the House.

Yet in the rush to reject Obamacare, as the ACA is popularly known, there lacks unanimity among Republicans in each chamber to make changes.

The first House effort to pass the American Health Care Act never got to a vote before it was withdrawn. A second version passed 219-215 despite GOP defections.

The Senate’s Better Care Reconciliation Act never came to a vote, either, when enough Republican senators gave it a thumbs-down for leaders to recognize its chance of passage was nil. The procedural vote July 25 required not only Pence’s tiebreaker but the return to the Senate floor of Sen. John McCain, R-Arizona, who had undergone eye surgery that revealed brain cancer, to create the tie in the first place.

Later July 25, the Senate rejected a revised version of the Better Care Reconciliation Act in a 57-43 vote with nine Republicans voting against it. On July 26, in an afternoon vote, senators rejected a repeal-only measure. More votes and proposals lay ahead.

“There’s no such thing as perfect legislation. As things pass, you realize that things don’t work out as well as it should,” said former Rep. Bart Stupak, a Michigan Democrat who fought to retain pro-life provisions in the ACA and who has written a book, “For All Americans,” about the legislative tussling behind the ACA’s passage. After it became law, he and other pro-life Democrats also pressed President Barack Obama to sign an executive order stipulating no federal funds could be used to pay for abortions.

Stupak, in an interview with Catholic News Service, said the ACA was modeled after “the Massachusetts plan that was instituted by then-Gov. Mitt Romney,” a Republican. “Surely we would get other Republicans to join us” for a bipartisan piece of legislation,” he added. “That didn’t happen. But we did end up with the insurance exchanges. But no one anticipated that 30-some states would never participate. The federal government had to set up exchanges for these 32 states.”

“Presidents have been imploring Congress to pass a national health care plan” for a century, said Stupak, a Catholic, noting that President Bill Clinton’s plan in 1993 —when he famously assigned his wife, Hillary, to lead the task force to design the bill — never got out of committee. “I’m pleased we got it done,” Stupak said of the ACA. “Does it need work? Yes.”

“Mustering the political will” to pass the ACA “resulted in a fairly large number of moderate- and low-income people getting health insurance in a more stable way than what they were used to getting, and that’s quite an achievement,” said Jim Capretta, a resident fellow and health care policy expert at the American Enterprise Institute, which leans toward the conservative side of the political spectrum.

“The Affordable Care Act passed with only Democratic votes. I think that’s the primary reason why that’s unstable now. You don’t get buy-in from the other party,” he added, making the law “subject to a lot of dispute and disagreement, and half the country sort of distrustful of what was passed.” With both parties working together, Capretta said, it shields it from “elements of either party to attack it. That’s why (with) big policy changes, you’re better off trying to do it in a bipartisan way.”

But to hear first-term Republican Rep. Francis Rooney of Florida — a former U.S. ambassador to the Vatican — bipartisanship is hard to come by. “There has been no evidence of any Democrat wanting to team up to repeal and replace Obamacare and give America patient-centric, choice-oriented care,” he told CNS July 20.

“Unfortunately, the country is very polarized, and we have two radically different views on the size of government,” Rooney said later. “I don’t know how well they’re going to be reconciled. I tend to think that our way is the right way.”

“Republicans are not bad people. We may disagree on some concepts, but I think everybody agrees on the essentials,” Stupak said. If Republicans want to repeal the ACA’s individual mandates imposing a fine on people who will not buy insurance, for instance, he added, “once again, you go back to the health care infrastructure. Who pays for it?”

“I think President (Donald) Trump will sign any reasonably conservative measure. He said he would sign the House bill, or the Senate bill or the repeal bill,” Rooney said during a break from a House session. “So the president isn’t the problem. It’s the Senate. And all the Republican senators, except maybe one or two, have voted to repeal or replace Obamacare.”

He added, “I’d be pretty disappointed if we can’t get across the finish line with what we’ve been saying we want to do for six or seven years and what every Republican in office campaigned on. That would take some serious thought on where we are going and do we have the capability to lead the way we’ve told the people we’ve wanted to lead.”

“Once a law is passed,” Stupak told CNS, “the duty and responsibility of Congress is to fix the legislation — or repeal it.” While he said he doesn’t begrudge the Republicans for the effort to repeal the ACA, he cautioned them to “do it with the best interests of the American people at heart.” If up to 32 million Americans would be without health insurance by 2026 — as the Congressional Budget Office said in scoring the since-scuttled Better Care Reconciliation Act — “then what would you would do with them?”

Even Rooney acknowledged, “It might be a little irresponsible to the American people not to pass a comprehensive repeal and replace.”

Capretta argued that the unwieldy nature of America’s public-private health care structure could be at fault. “Decide what we want,” he said. “Right now we have a mishmash.” While Capretta favors market-based solutions, the main goal should be cost controls. “One way or the other, there needs to be more discipline in the system on costs,” he said, and without them, there will be “more government control.”

“I still have faith in the United States Congress — 99.9 percent are there for the right reasons,” Stupak said. “Call it whatever you want—Trumpcare, Ryancare, the Better Health Care Act. Most members of Congress don’t care what you call it, but make sure it is equal to, if not better than, what we already have.”

He added, “Let the talking heads step aside. Let both sides sit down. I think you’d be surprised how quickly it could come together.”