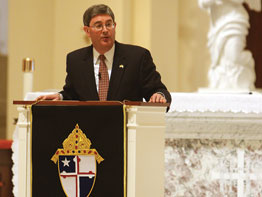 It may be tempting to view Pope John Paul II’s many accomplishments in the political arena as the product of his unique personal experiences growing up as a Pole under Nazi and Communist domination.

But George Weigel argues that while the late pope was certainly shaped by his background, his effectiveness in the public square had much to do with two centuries of trends in Catholicism that paradoxically led to lessened temporal power for the pope but increased moral suasion.

Speaking at the second John Carroll lecture, held May 12 at the Basilica of the National Shrine of the Assumption of the Blessed Virgin Mary in Baltimore, Mr. Weigel said the public accomplishments of Pope John Paul II helped restore politics “to its true dignity while keeping politics within its proper sphere.”

The pope did so by “demonstrating in action the linkage between profound moral conviction and effective political power,” said Mr. Weigel, author of a biography of Pope John Paul II and senior fellow of the Ethics and Public Policy Center in Washington, D.C.

“Contrary to ideas widely accepted since the late-18th century, the public impact of John Paul II suggests that politics, or economics, or some combination of politics and economics, is not the only, or perhaps even the primary, engine of history,” said Mr. Weigel, whose lecture was titled “Popes, Power and World Politics: From Leo XIII to Benedict XVI.”

“The revolution of conscience that John Paul II ignited in June 1979 in Poland – the moral revolution that made the nonviolent political revolution of 1989 possible – cannot be explained in conventional political-economic categories,” he said.

From at least the fifth century, popes have been “players” in the world of power, Mr. Weigel said. Many of them employed a kind of conventional temporal power he described as “Constantinian.”

It was in the mid-19th century when a new form of papal engagement with the world of power began to emerge, he said. By then, the pope’s temporal power waned with the loss of the Papal States to Italian nationalism. Yet popes were speaking with a different kind of voice.

Quoting Cambridge historian Owen Chadwick, Mr. Weigel pointed out that Pope Gregory XVI condemned the slave trade in 1839 – a condemnation he had no political power to enforce. Mid-19th century popes also defended local bishops and local churches on contested questions such as local episcopal authority and marriage law in Europe, he said.

“Here, for the first time, the popes brought into play the levers of international public opinion and the international press,” he said. “During this period, the papacy gained more effective control over local churches; but this trend, often deplored as centralization, also meant that the popes could help local churches against various governmental pressures,” Mr. Weigel said.

Pope John Paul II demonstrated his strategy of political change through moral revolution – a “post-Constantinian” model – during his first pilgrimage to Poland in 1979, Mr. Weigel said.

“By returning to his people their authentic history and culture, and thus giving them a form of power that the regime’s rubber bullets and truncheons could not reach, the pope demonstrated that the Communist emperor had far fewer clothes than realist analysts – including both Western political leaders and Vatican diplomats – suggested,” he said.

Pope John Paul II revitalized the papacy for the 21st century by “retrieving and renewing the office of Peter’s first-century roots, which lie in the New Testament’s portrait of Peter’s unique role as the apostle who ‘strengthens the brethren,’” Mr. Weigel said.

Archbishop Edwin F. O’Brien, thanking Mr. Weigel for his talk, said Baltimore is “very, very fortunate” to have him as a native son. He commended the speaker for shedding light on the church’s international character.

The final installment of the John Carroll Lecture Series will be held June 9. Colleen Carroll Campbell, author of “The New Faithful: Why Young Adults are Embracing Christian Orthodoxy,” will speak about young adults in the church. The free lecture is open to the public and will take place at 7 p.m. at the basilica.

To view a video of Mr. Weigel’s lecture, which was attended by 205 people, visit www.archbalt.org.