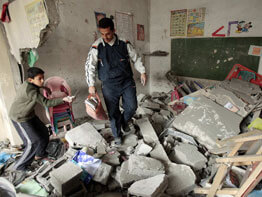 VATICAN CITY – The Gaza Strip increasingly is looking like “a big concentration camp” while egoism, hatred, poverty and injustice are fueling the continual slaughter in the Holy Land, said a top Vatican official.

“We are seeing a continual massacre in the Holy Land where the overwhelming majority has nothing to do with the conflict but it is paying for the hatred of a few with their lives,” said Cardinal Renato Martino, head of the Pontifical Council for Justice and Peace, in a Jan. 7 interview in the Italian online newspaper IlSussidiario.

Israel’s foreign ministry spokesman, Yigal Palmor, criticized Cardinal Martino’s comments, saying they “seem to have come directly from Hamas propaganda” and did nothing “to help bring people closer to the truth and peace.”

By saying the Gaza Strip resembled a concentration camp, the cardinal was ignoring “the unspeakable crimes” committed by the Palestinian militant group Hamas, he said in a Jan. 7 interview with Agence France-Presse.

Mr. Palmor said Hamas “has derailed the peace process and has turned the Gaza Strip into a giant human shield.”

In an interview with the Italian newspaper La Repubblica Jan. 8, Cardinal Martino defended his description of the Gaza Strip, saying those who criticized his remarks “can say what they want. The situation in Gaza is horrible.”

“I say, look at the conditions of the people who live there. Surrounded by a wall that is difficult to cross – in conditions (that are) contrary to human dignity. What has been happening recently there is horrifying,” he said.

He said there was nothing in his comments “that may be interpreted as anti-Israeli” and he condemned Hamas’ use of violence against Israel.

But he lamented the deaths of so many Palestinian civilians and children and the destruction of nonmilitary targets by Israel, suggesting such losses could have been avoided given that Israeli forces have sophisticated surveillance “technology that can let them identify an ant on the ground.”

Both Israeli and Palestinian leaders have done reproachable things, he said, but “Israel has the right to live in peace, (and) the Palestinians have the right to have their own state.”

“Israel certainly has the right to defend itself and Hamas must keep that in mind,” he added.

“I am not defending Hamas: If they want a home, if they want a Palestinian state, they have to understand that the path they have set out upon is wrong,” said the cardinal.

He said both Israelis and Palestinians are at fault for not doing enough to stop the fighting and start peace talks.

In the Jan. 7 interview with IlSussidiario, Cardinal Martino said: “If they are unable to come to an agreement then someone else had better feel an obligation to do it for them. The world cannot sit and watch and do nothing.”

He called for an “international intervention force” to stop the fighting.

The reason Palestinians and Israelis have so far not been able to end the conflict and begin dialogue is because there is an acute lack of respect for human dignity, he said.

“No one recognizes the interests of the other but only one’s own. However, the consequences of egoism are hatred toward others, poverty and injustice, and the defenseless are always the ones who pay,” he added.

Nearly 700 Palestinians, including 300 civilians, have been killed since Israel began its attacks on Gaza Dec. 27 to root out Hamas.

The fighting has made access to basic needs even more difficult as food, medicine and other relief items already were lacking due to an 18-monthlong Israeli blockade of the Gaza Strip, said a Jan. 5 press release by Caritas Internationalis, an umbrella group of Catholic aid agencies.

Meanwhile, in his annual address to diplomats Jan. 8, Pope Benedict XVI appealed for an immediate cease-fire in Gaza and the resumption of negotiations between Palestinians and Israelis, with the support of the international community.

“Once again I would repeat that military options are no solution and that violence, wherever it comes from and whatever form it takes, must be firmly condemned,” he said.

He said a cease-fire is “an indispensable condition for restoring acceptable living conditions to the population.”

He urged both sides to resume negotiations and agree to “the rejection of hatred, acts of provocation and the use of arms.”