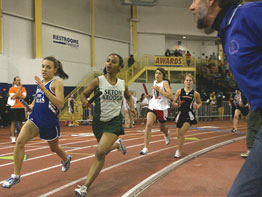 Seton Keough High School senior Erin Brooks was the first female athlete in IAAM history to win all four of her events.

“She put the team on her back,” said Jim Lancaster, the Gators’ head indoor track and field coach. As student class president and a member of the National Honor Society, it seems that Brooks can do it all.

Defending champions of the IAAM indoor track and field title, the Gators went up against a tough squad from McDonogh School, but came away victorious with a double-digit lead over second-place McDonogh with a score of 134-115. Mount de Sales Academy, Catonsville, placed a distant third, scoring 42 points, and The John Carroll School, Bel Air, scored 41 points for a fourth-place finish.

The meet was close between the Gators and the Eagles, as it had been throughout the regular season. With five events to go in the championship meet, the Gators led by seven points. When the triple jump results came in, the Gators soared ahead by 10 points, with two events left.

In the end, Seton Keough was too much to overpower, with solid performances in the field events and the team relays.

The Gators are chock-full of solid athletes, including the 4×400 relay team of Asia Woodside, Leila Forrester, Colleen Shea and freshman Dara Parker. And then there’s the 4×800 relay team, who, according to Lancaster, were almost scratched to save their legs for upcoming events. That team was made up of Asia Woodside, sophomore Chrissy Griffin, and seniors Katie Sacker and Colleen Shea. Lancaster said, “Yes, we almost scrapped that event because we didn’t want to burn folks out, but they not only took first place, they broke a school record with a time of 10:09.03.”

The Gators will continue to prepare for Feb. 9 when they travel to Georgetown Prep for the Maryland Private School Championships.