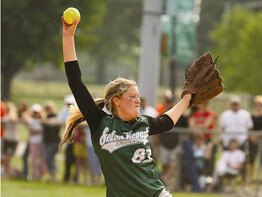 Strong pitching, timely hits and confident play down the line were part of the May 12 Interscholastic Athletic Association of Maryland softball championships at Harford Community College, which helped The Seton Keough High School, Baltimore; Maryvale Preparatory School, Brooklandville; and Towson Catholic rise to the top to secure their 2007 conference championship titles.

In A Conference action, the top-ranked Seton Keough Gators (15-3) put up two runs in the bottom of the first inning and then put it on auto-pilot behind another strong pitching performance by senior Carly Martin to secure the 2-0 win over a tenacious team from John Carroll (10-7). This gives the Gators their first championship title since 2003.

There was no doubt that the Gators’ Martin was on, allowing five hits on the day and striking out 14 Patriots. In fact, the game ended on a swinging strikeout. Stepping up offensively for the Gators were seniors Kathy McLaughlin and Meghan Kovacs.

Despite the loss, John Carroll held their heads high as their season progressed with numerous highlights behind the strong pitching performance of senior Angela DiBeneditto. Getting to the finals was a first for the John Carroll softball program.

In B Conference action, the defending champs, the Maryvale Lions (15-3), came from behind and scored the winning run on a sacrifice fly in extra innings to top McDonogh School, Owings Mills, 4-3. This is three in a row for Tim Messina and his MVP Lions. According to Messina, who is in his seventh season with the Lions, he wasn’t worried even as the innings progressed and it looked like his team was going to get blanked. It’s what champions are made of as the Lions roared back in exciting fashion taking the game into extra innings.
Sophomore Stephanie Schell pitched a solid game while senior Heather Peluso got the win in relief, pitching three scoreless innings.

As the C Conference season unfolded Towson Catholic led the pack, giving up just one regular season loss to St. Paul’s School for Girls. The Owls’ season, 13-1, came down to a rematch of TC and St. Paul’s, but this time the Owls were ready, scoring four runs in the first inning and winning 6-1.

The team is led by freshman pitcher Jessica Butler who notched her 200th strikeout during the course of the game, while throwing a no-hitter and striking out 16 on the day. Butler’s battery-mate, junior catcher Samantha Smith handles Butler’s 60-plus mph pitches with ease. Offensively, the Owls have been led by senior third-baseman Tiffany Thompson, a strong player who batted over .500 with five home runs on the season. Senior outfielder Wendy Gelhaus has also stepped up for the Owls as has senior first baseman Tracey Johns. Johns smacked two homers this season, drove in 22 RBIs and batted .486 on the year.