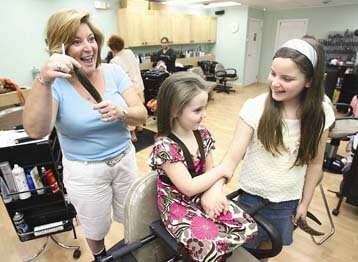 Sitting on a booster seat in the Signatures hair salon in Annapolis, 4-year-old Caitlin Guenther watched herself stoically in the mirror as Patti Linkins gathered the girl’s lush, long locks into a pony tail and raised a pair of scissors.
In a series of assertive snips, the hair stylist clipped 10-inches off the brunette’s soft hair – gently raising the freed pony tail like a trophy Aug. 8.
At the sight of her missing hair, Caitlin let down her guard and shed a few tears while her older sister held her hand and family members and other onlookers applauded and snapped photos.
After a few minutes and some hugs from Julie Guenther, her mother, Caitlin was all smiles. Swaying back and forth while Mrs. Guenther sang “I Feel Pretty,” Caitlin twirled her clipped hair between her fingers.
“It’s going to help a girl who doesn’t have any hair,” whispered Caitlin shyly. “It’s lots and lots of love.”
Caitlin donated her hair to a Florida-based charity called Locks of Love that provides hairpieces to disadvantaged children with medical hair loss caused by cancer treatments or other conditions.
The young parishioner of the Church of the Holy Apostles wasn’t the only one to make a donation that day. As soon as she finished, Grace, the older sister who had held her hand, slipped into the barber’s chair and had 10-inches of her even-thicker brunette hair snipped off.
“The kids that will get our hair suffer through a lot,” said Grace, an 11-year-old sixth grader at the School of the Incarnation, Gambrills. “At least they’ll have hair to go out.”
The idea for making the donations came as the sisters were praying for Mary St. Jacques, a kindergarten teacher at the School of the Incarnation. Ms. St. Jacques is a cancer survivor who lost her hair last year during treatments.
Ms. St. Jacques was on hand to witness their act of love and said she felt deeply supported by the children and the entire Incarnation community.
“They absolutely got me through it,” said Ms. St. Jacques, a parishioner of St. Mary, Annapolis.
As Grace’s short hair was being styled on what was one of the hottest days of the summer, the teacher smiled at Caitlin.
“You are an answer to someone’s prayer,” she said. “You are such a good pray-er. I could feel it every day.”
Though her own hair has just grown back, Ms. St. Jacques was still able to make her own donation to Locks of Love. She recently discovered two long locks of her own braided hair she had clipped off long ago in fourth grade and saved in a long-forgotten box.
“As a cancer survivor, I really appreciate what they have done,” she said. “I can truly appreciate how much hair means to a little girl. It’s such a gift of love.”
Mrs. Guenther, a first-grade Incarnation teacher, agreed.
“I’m so proud of them,” she said.