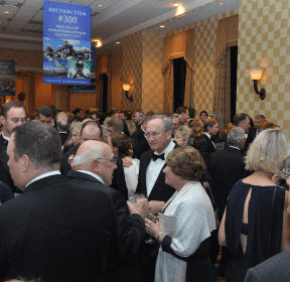 By Elizabeth Lowe
elowe@CatholicReview.org
Twitter: @ReviewLowe
Growing up in Baltimore City, Tavon Whitener was exposed to crime and poverty. By age 8, he remembers being argumentative, angry and in trouble at school.
“I was much too much for a single mother to handle,” Whitener said. “It’s pretty clear to me why my mother’s pursuit of private school education was necessary. It was more than a wish that I find another path. She was wishing, hoping, praying that I did not fall into the same fate as so many people in our community.”
Whitener, a graduate of Archbishop Borders School in Highlandtown, Loyola Blakefield in Towson and St. Joseph’s University in Philadelphia, shared his story at the fifth annual Gala for Catholic Education Oct. 19 at the Baltimore Marriott Waterfront Hotel.
The event raised about $800,000 in tuition assistance for Catholic schools in the Archdiocese of Baltimore.
Whitener, now 22, is giving back. He is one of three 2009 Loyola graduates in the school’s Alumni Service Corps this school year. He is an English teacher and football coach at Loyola.
“My vocation for this year,” Whitener said to the gala’s 700 attendees, “is much more than a job. A job pays the bills, but a vocation pays the soul. I give back because it’s really crucial. So many people have given to me. Catholic education has been a bridge for me.”
The archdiocesan Partners in Excellence scholarship program, a gala beneficiary, afforded Whitener the opportunity to attend Catholic schools.
“It’s easy to see why people want to support the gala,” Archbishop William E. Lori said, “because they want to support our schools. And, most importantly, you want to support the children that they serve.”
He continued, “Our challenge then and now and into the future is figuring out how more and more deserving young people can have the same grace, the same opportunity, that you and I have had to attend a Catholic school and to benefit from the same life-changing experiences that resulted from the Catholic education that we received.”
Archbishop Lori recognized St. Joseph School in Cockeysville, St. Margaret School in Bel Air and St. Mary’s Elementary School in Annapolis for being named National Blue Ribbon Schools by the U.S. Department of Education last month.
Fifteen other Catholic schools in the archdiocese have received the award.
Catholic schools superintendent Dr. Barbara McGraw Edmondson highlighted the growing Montessori program at St. Pius X School in Rodgers Forge and the expansion of the archdiocesan PRIDE (Pupils Receiving Inclusive Diversified Education) program, which is new this year at St. John Regional Catholic School in Frederick and St. Mark School in Catonsville. PRIDE continues to be offered at St. Clement Mary Hofbauer School in Rosedale.
To provide tuition assistance for students attending Catholic schools or fund an endowment for Catholic schools, visit https://community.archbalt.org/gala.
Also see:
Pope Francis receives Hackett, new U.S. envoy to the Vatican
PrevNext