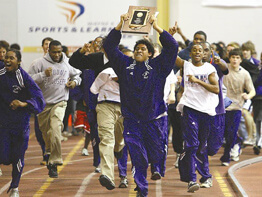 After handily defeating their league competition by an average of 40 points every meet, the Gaels were focused on regaining the MIAA championship title, taken from them in 2005 by Archbishop Curley and in 2006 by McDonogh School.

The Gaels, with 149 points, left nothing in question in 2007, outscoring second-place Gilman by 82 points and third-place Loyola Blakefield by 98 points.

To their credit, the Gaels won an overwhelming 10 events to secure the title.

The team will now take a week off and then prepare for the Kutztown Invitational Feb. 3.
“We actually thought next year was going to be our year, but every week the team just kept improving, especially Duane Parker and senior Tom Myer,” said head coach Gene Constantine, who has been with the program since 1980.

Constantine, a five-time Coach of the Year, credits his coaching staff Jack Peach (distance), Vince Fuller (jumpers) and Brother Charles Culley (pole vaulters and high jumpers) with much of the program’s success.

Other Mount St. Joe first-place finishers include triple jumper Tyrell Fridie (32-feet, 2.5 inches), senior Jordan Harris in the 55-meter hurdles with a time of 7.80, high jumper Matt Parks (6 feet) and Andrew Darmody in the pole vault with a height of 12 feet.