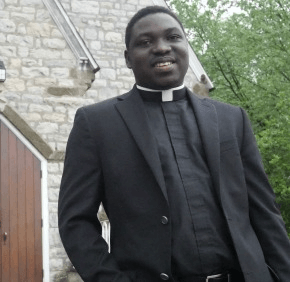 Deacon Francis Ouma, 29, was a boy of 7 when he realized he wanted to be a priest.

“Actually, not a priest,” he explained, recalling St. John Paul II’s historic 1993 visit to his native Uganda. “I wanted to be like him.”

He remembered a potato garden being made into a road to facilitate the pope’s journey from the airstrip to Deacon Ouma’s parish.

His mother explained to her star-struck son that he would have to become a priest before he could be pope.

The young Deacon Ouma doubled down, entering the seminary at 13.

“I’ve been there ever since,” he said.

Deacon Ouma will be ordained to the priesthood for the Archdiocese of Baltimore on June 20 at the Cathedral of Mary Our Queen in Homeland.

Due to visa difficulties – and despite the best efforts of the archdiocese – his mother and father will remain in Uganda as their son receives holy orders at the Cathedral of Mary Our Queen in Homeland. His pending visa status – he came to the U.S. as a student and is awaiting the designation of “religious” – gives him less standing as a host for potential visitors.

However, the archdiocese will live-stream the ordination for his parents to watch in Uganda.

And Deacon Ouma continues to enjoy the support of his friends and colleagues, who have acted as a second family in Baltimore.

“They’ve made this place so much a home for me,” Deacon Ouma said, emphasizing the hospitality of Monsignor Lloyd E. Aiken, pastor, and the rest of the staff at Sacred Heart in Glyndon, where he has been staying.

Deacon Ouma grew up in the then-war-torn northern region of Uganda. His family, faced with the brutality of Joseph Kony’s Lord’s Resistance Army, was forced to flee to refugee camps. Deacon Ouma’s oldest brother was killed in the conflict; his father was kidnapped but later escaped.

Deacon Ouma persevered toward the priesthood. With the help of a scholarship, he left Uganda for Baltimore in 2010 to study at St. Mary’s Seminary and University. He has no plans to leave.

“I feel there’s a lot of need here,” he said, adding that he sees his ministry as a missionary vocation.

“There were missionaries who came to evangelize Uganda in years past,” Deacon Ouma said. “I thought that from their example, I would reach out and bring God and Christ to the people here.”

He’s already had a substantial amount of experience, most recently at St. Ambrose in Park Heights.

Deacon Ouma, whose car was broken into on his first day in Park Heights, appreciated the learning experience of his assignment.

“Working at St. Ambrose, I learned that some people are not sure whether they are wanted or liked,” he said. “The fact is, they are loved, but they need to hear it.”
He characterized Baltimore as a “nice city,” but one that “needs a lot of work” supporting the neighborhoods where most of the minority groups live.

“Not in a hand-out kind of way,” he said, “but by supporting them in realizing their potential and using it for the best.”

Since Deacon Ouma has come to Baltimore, the situation has improved in Uganda, which he visits every summer to renew his visa.

“There’s a breath of serenity and peace,” he said. “I don’t think we’ve ever felt that before. When I was growing up, you couldn’t do anything after 7 p.m.; you had to be either in your home or at a refugee center.”

Now, his family has returned to farming, raising goats, chickens and cattle, while Deacon Ouma awaits word of which parish he will serve as a priest.

Four to be ordained priests for the Archdiocese of Baltimore

With Jim and Jeannie Gaffigan, it’s a family affair