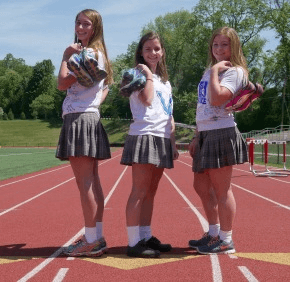 LUTHERVILLE – Victoria Sill, Julia Noel and Morgan Ferrans, three young women who graduated June 5 from Maryvale Preparatory School, have much more in common than their affinity for running.

All three were serious competitors in track and field, and all – having been named 2015 Distinctive Scholars by the Archdiocese of Baltimore – excelled academically.

Perhaps most notable, however, all three enjoy devoting their time and energy to acts of service, both at the independent Catholic girls’ school for grades 6-12 in Lutherville and on their own.

Sill volunteered with the Baltimore Saints, a group that works to improve the lives of adults and children with intellectual disabilities through ice hockey. Before they can learn to play hockey, participants must learn how to skate, and that’s where Sill came in.

“You see them progress through the year,” she said. “They start out with a walker, but by the end of the year, they’re like, ‘No, I don’t need that.’ ”

As part of the Maryvale Lunch Bunch, Noel has made sandwiches for those in need, sometimes serving them at Sarah’s Hope, a St. Vincent de Paul of Baltimore emergency shelter for women and children.

She also hopes to continue her volunteerism at Villanova University, where she will begin classes in the fall.

“I might work with Habitat for Humanity, or with underprivileged children in Philly,” Noel said.

Ferrans has helped run a camp for children, some of them suffering from anxiety, on her parents’ Phoenix farm. While the children arrive shaking with nerves and exiting their vehicles with extreme difficulty, they undergo a change as they interact with the horses, Ferrans said.

“After a week, they’re on a horse by themselves, and confident,” she said. “Their parents are amazed.”

Taking into account their current affinity for service, it’s not surprising that all three girls have ambitions in the medical field.

Sill will attend Boston University, where she plans to study neuroscience.

“I just want to study it because it sounds interesting, and then maybe follow a pre-med track,” she said.

At Villanova, Noel will study nursing, with the goal of becoming a pediatric nurse practitioner.

“I love kids, and I babysit a lot,” she said, adding that getting a nursing degree is “a lot quicker than going to medical school, and less expensive.”

Ferrans hopes to focus on both animal science and psychology so she can gain insight into “how therapy animals affect the human brain.”

After that, she said, “I definitely want to go to medical school to study psychiatry.”

She will be following in her father’s footsteps.

“My parents have never pressured me to be a doctor, but I grew up hearing interesting stories,” Ferrans said, adding that doctor-patient confidentiality was always kept intact.

Before adulthood takes over and they begin working on their futures, the girls have one more carefree summer.

Ferrans will be taking a two-week trip to Europe – mainly France and Italy – with friends and family. Sill will attend a running camp in New Hampshire. Noel has tickets for the 2015 U.S. Women’s Open in Lancaster, Pa.

“My dad and I love to watch golf,” she said.

Archdiocese of Baltimore sends out a stellar class of 2015

With Jim and Jeannie Gaffigan, it’s a family affair

Beyond the Bell: Social Justice Coalition makes a difference at Maryvale