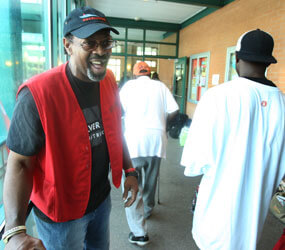 John Bell, program assistant at Our Daily Bread Employment Center in Baltimore, is proof of a number of truths: Everyone has a story; anyone can be saved; and God has a plan for each individual, no matter how strange or winding the path.

“God just did some work on me,” Bell said.

He has not always been employed by Our Daily Bread. Bell started as a guest there in 2005, when the center was still on Cathedral Street.

A former Marine, Bell had been working for Rockland Industries on Edison Highway before he fell on hard times.

“I had started getting sick and missing time off work, and I ended up getting laid off,” he explained. “I found out what I thought and what they thought were just ulcers ended up being colon cancer. Then they found out I had a bad back.”

Bell needed two colon cancer surgeries and three back surgeries. “I had lost my job; my bank account went to zero,” he said. “No matter what your condition, you still have to pay bills. Between the second cancer surgery and the second back surgery, there was no gas and electric.”

It wasn’t until Bell met up with an old friend – a homeless man he had put up in his house, with the promise of plenty of blankets, albeit no heat or lights – that he started seeking places to eat.

To Bell’s surprise, his friend woke him at 6 a.m. after his first night under Bell’s roof. The two walked to Church of the Redeemer on Harford Road for a church service and breakfast. Later that day, Bell found himself eating at Our Daily Bread.

“To be honest,” Bell said, “I was embarrassed, because sometimes I come by there and I see people, and I’m thinking those people don’t want nothing out of life – they’re looking for a hand-out, because if you’re not in that situation, you don’t know. And now I find myself standing in this line. That’s how God works.”

Bell said he continued to go to Our Daily Bread after the center made the move to its current location on The Fallsway. “(When) I saw the volunteers, people doing things, that put me in the frame of mind that maybe I can help somebody somewhere.”

After a few years, Bell received a clean bill of health from his doctor and celebrated by going to Lexington Market and getting himself “two big old hot dogs.” On his way back from the market, “I was just walking up here, and suddenly – now, why? I don’t know – it was like I was just drawn up that ramp.”

One of the Our Daily Bread workers asked Bell if he was there to eat. When Bell said he was not, the worker reminded Bell he could not come just to hang out. “Then I said, ‘How can I help?’ And then, when I looked at what I had said,” Bell explained, making a hand motion as though catching something from his mouth, “I’m like, ‘Where did that come from?’

“I started (volunteering) one Saturday a week, and then it just grew to two days, three days, five days,” he explained. “For about a year straight, I (volunteered) seven days a week,” he said. “And the more I (volunteered) here, the more I got to know people, and it really made me feel like I was worth something, like I was really helping people.”

“I guess I started feeling the way other people (felt) … that helped me,” he added, “how it makes you feel like you’re actually accomplishing something, that you can see what your labor is producing, so to speak.”

Bell has been employed as a program assistant for Our Daily Bread for about six months now. His supervisor, Johnny Witherspoon, said Bell assists in the program wherever needed and generally helps keep order among guests.

Witherspoon said that Bell was voted Program Assistant of the Month for March for his perfect attendance, punctuality and teamwork. This comes as no surprise: Bell’s dedication found him walking to work during February’s blizzard.

Believing that everyone is just one step away from something good or something bad in their lives, Bell asserts he is no better than the people he helps.

“I’m just a little bit different,” he said, “because of one thing: God moved me to the other side.”