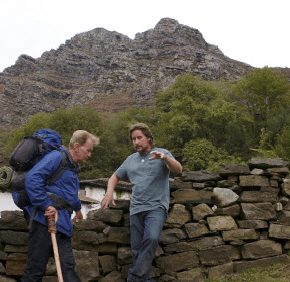 By Father Jesse L. Bolger
Father Jesse Bolger, associate pastor of Holy Trinity, Crucifixion and Good Shepherd, all in Glen Burnie, shares his personal reflection of leading a Marian pilgrimage during the Year of Faith.
When his holiness Benedict XVI, now pope emeritus, announced a “Year of Faith” to celebrate the 50th anniversary of the opening of the Second Vatican Council, the idea of leading a Marian pilgrimage to mark the occasion came to mind.
I developed an itinerary that included Fatima, Portugal; Santiago de Compostela, Spain; and Lourdes, France. Parishioners from the parishes I serve in Glen Burnie attended, as well as those from several other parishes. I was also blessed to have my mother, Barbara, join us, as well as my brother, Thomas, who led us in song on the guitar at daily Mass.
Our first stop was Fatima, to celebrate the Feast of Our Lady of Fatima on May 13. More than 300,000 Catholics reportedly attended the Mass. The universality of the Catholic Church was clearly evident as I gazed out upon the faithful during the Mass. I was fortunate to get a seat in the main sanctuary for the liturgy. After Communion, the Patriarch of Lisbon, Cardinal José Policarpo, consecrated the pontificate of Pope Francis to Our Lady of Fatima, at the pope’s request. We were reminded that the message of Fatima, given to Blessed Francisco and Jacinta Marto, and their cousin, Lucia dos Santos, is as relevant today, as it was in 1917. We still need to pray for conversion, for the grace of perseverance in living our faith in the public square, and to entrust the entire human race to the Immaculate Heart of Mary.
From Fatima, we travelled north to Santiago de Compostela in Spain. Tradition holds that this is the place where St. James the Greater brought the Gospel and was later buried. Since the ninth century, Christians have walked The Way of St. James, known as “The Camino.” During our guided tour, we learned that it was the 800th anniversary of St. Francis of Assisi’s pilgrimage to Santiago. A recent movie starring Martin Sheen, titled, “The Way,” brilliantly captures the allure and enduring value of the Camino.
Yes, we are all on a journey, all on the way, pilgrims in search of that one thing that will satisfy our restless hearts. By God’s grace, we have found that “pearl of great price,” Jesus Christ, who is the only way, truth and life that leads to salvation. For so many people, who are still looking for truth, for peace and love, it is our duty to spread the Good News, and to point the way to Christ, the meaning of the “New Evangelization.”
From Santiago, we continued north to Lourdes in Southern France, the site of the 1858 Marian apparition to a young girl, Bernadette Soubirous. It was to St. Bernadette that Our Lady affirmed the dogma of the Immaculate Conception, which had been promulgated four years earlier by Pope Pius IX. In Lourdes, we entered the baths next to the grotto. As I witnessed the ill and handicapped pray and enter the healing baths, I was reminded that we do not suffer alone nor is our suffering without value.
What did our group discover on this Marian pilgrimage to mark the Year of Faith? We touched with our hands and we saw with our eyes the evidence of Mary’s role in salvation history. As this Year of Faith continues, let us pray that she who was assumed into heaven, will be for us a constant intercessor and guide, as we make our way to our ultimate destination, the heavenly Jerusalem.
Copyright (c) May 30, 2013 CatholicReview.org
PrevNext