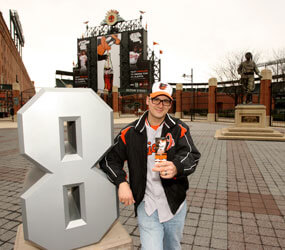 “One of my earliest memories involves going with my dad down to Memorial Stadium, and feeling like the whole place was so much larger than life,” said Bailey, an English teacher at Calvert Hall College High School. “That massive dedication wall seemed like it reached up to the heavens for a little kid. Seeing the guys whose baseball cards I collected in real life felt too good to be true.”

He has chased that sense of wonder during the last five years, as a season ticket holder at Oriole Park at Camden Yards, the team’s home since 1992. Despite the fact that the Orioles have failed for the last 13 seasons to earn a .500 record, Bailey keeps returning.

He’s hopelessly in love with the team, owning several jerseys and an untold number of hats and bobbleheads.

His patience might be rewarded in 2011, when the O’s hope to emerge from the American League East cellar. The team begins its season in Tampa Bay April 1, and its home opener is April 4, against the Detroit Tigers.

The Orioles added several free agents in the offseason, including sluggers Vladimir Guerrero, Derrek Lee and Mark Reynolds, to go along with a young nucleus of Nick Markakis, Adam Jones, Matt Weiters and Brian Matusz.

Among the people please with the acquisitions is manager Buck Showalter, who took over the club in the final two months of the 2010 season and led the Orioles to the best record in the AL East during that period. Showalter said the team’s vice president of baseball operations, Andy MacPhail, and owner Peter G. Angelos made crucial moves.

“If you take a look at where we were, where we are and the things we wanted to attack this offseason,” Showalter said in January, “(they) really put us in a good position.”

Excluding the strike-shortened 1994 season, the Orioles attracted at least three million fans at Camden Yards from 1992 through 2001. They have drawn less than two million fans in each of the last two seasons and have not had a winning season since 1997, when they went wire-to-wire as AL East winners.

“It was a special time to be an Orioles fan,” Manfra said. “Boy, you were really proud to be a fan. If you’re of my generation, you hope that Buck Showalter can bring back the days of glory.”

Is ‘next year’ this year?

As a student at St. Ursula School in Parkville, Doug Heidrick was hooked when the Orioles won the World Series in 1983.

“I remember Cal Ripken catching the last out against the Phillies in the World Series,” Heidrick said. “After they won, we rode around where we grew up. People were celebrating. It was a good time.”

Since then, Orioles have fans have been saying, “There’s always next year.”

Now the communications director at Calvert Hall Heidrick takes his children, Molly, 7, and Ben, 4, to Orioles games. They attend Immaculate Heart of Mary School in Baynesville and are learning the names of their favorite players. Doug hopes his children will have their own championship memory.

“You obviously would love to see them be better,” he said of the Orioles. “I don’t think the Orioles want to lose. You see how the Ravens are. It would great for the city of Baltimore to have two major sports teams be successful.”

Bailey, the Calvert Hall English teacher, will be at Camden Yards April 4 for the home opener. If things turn sour again this season, you won’t catch Bailey praying for his team.

“God has more important things to do than worry about whether the Orioles win or lose,” he said. “But, let’s not forget, Jesus always reached out to the underdogs, the people most ignored by society, those people most cast off and hated. Doesn’t that seem to suggest that Jesus would be an Orioles fan?”

No matter how tough it gets, Bailey is an Orange-and-Black true believer.

“I come back again and again because one day, hopefully sooner rather than later, this is a team that will turn things around,” he said. “This is a city that is desperately trying to love its baseball team again, and when the pieces come together and the team takes that wild ride through the playoffs, I want to sit in those stands and know with pride that I was with them through it all.”