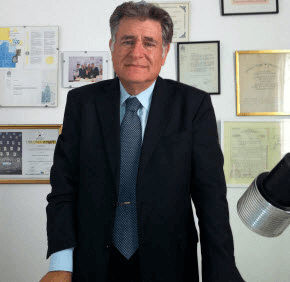 By David Agren
Catholic News Service
BUENOS AIRES, Argentina – Rabbi Abraham Skorka recalls meeting Archbishop Jorge Mario Bergoglio at a Mass for a national holiday two decades ago.
They shook hands afterward, and “he looked deep into my eyes,” Rabbi Skorka recalled of the man who would be elected Pope Francis. “He told me, ‘I think this year we’re going to eat chicken soup.’“
The line referred to Argentine soccer. Rabbi Skorka pulls for the River Plate club, whose fans are commonly called “chickens” by rivals. Pope Francis, meanwhile, supports the San Lorenzo club.
“I felt there was a meta-message: If you want to talk with me, the door is open. There are no protocols,” said Rabbi Skorka, rector of the Latin American rabbinical seminary in Buenos Aires and a leader in the country’s Jewish community.
“I had the sense that this man wants to be a bridge.”
Soccer formed the initial bridge between the two religious leaders, but their bond went beyond sport and helped to bring Christians and Jews closer together after some episodes of less-than-cordial relations in Argentina.
Pope Francis now faces the challenge of improving relations between the two faiths on an international level, but Rabbi Skorka told Catholic News Service that the experience in Argentina sets an example for both Catholics and Jews.
“We understood that only together could we make a better world,” he said.
The rabbi recalled riding with Pope Francis after an address at a synagogue on the eve of a Jewish ceremony – one of the few occasions the prelate accepted a ride from anyone.
“The entire way, he constantly told me: Believe me, I pray deeply for (you and the Jewish community),” Rabbi Skorka said.
The two leaders spoke regularly. They prayed and participated in interfaith groups and joined with an evangelical leader for a TV show.
“We didn’t prepare a script,” Rabbi Skorka said. “We all came with this idea in our heads.”
Rabbi Skorka wrote the forward to Pope Francis’ book on the Jesuits. The pair co-authored another book, “On Heaven and Earth.” The Pontifical Catholic University of Argentina, which Pope Francis oversaw, awarded Rabbi Skorka an honorary doctorate in 2012.
The rabbi considered the award, given to mark the 50th anniversary of the Second Vatican Council, a watershed moment.
“There are people who know the Catholic University very well and who told me this act couldn’t have been done 10 years ago. There would have been a revolution,” he said.
“The revolution was brought by Bergoglio.”
Observers in Argentina express similar sentiments about how Pope Francis improved relations with the largest Jewish community in Latin America.
“Bergoglio was one of the most influential figures … in interreligious initiatives,” said Sergio Berensztein, independent political analyst in Buenos Aires.
Berensztein, who is Jewish, said anti-Semitic expressions had been made previously by Catholics, but “since Bergoglio became the main figure in the church, that didn’t happen again.”
Rabbi Skorka expressed joy with his friend’s elevation to the papacy, but also some sadness.
“I’d like to still work with him, but he’s on the world level now,” Rabbi Skorka said.
“I have no doubt that the affection that I have in my heart for him, he has the same in his heart for me,” he added.
Related articles:
Pope begins ministry with biblical symbols, signs of universal ministry
Baltimore students in Rome among eyewitnesses to Pope Francis’ introduction
Copyright (c) 2013 Catholic News Service/U.S. Conference of Catholic Bishops
PrevNext