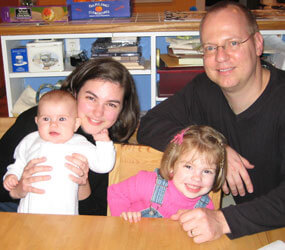 Julie Kline Rybczynski was just days away from death when Monsignor Jay F. O’Connor came to anoint her at Johns Hopkins Hospital.

She was depleted physically after two years of battling myeloid leukemia and infections. As Monsignor O’Connor was about to begin the sacred rite, he raised his hand to his forehead to begin the Sign of the Cross.

The frail Rybczynski lifted her hand and blessed herself. Julie lived her faith until she took her last breath June 19.

“It happened a few times over the course of her illness,” said her husband, Dave. “Sometimes she was too exhausted to open her eyes and she’d surprise you with her response. She’d have these tired, tired eyes and she would suddenly be sharp again.”

Friends, colleagues and family filled St. Francis of Assisi Church in Baltimore June 23 for a funeral Mass offered in honor of the former coordinator of the Archdiocese of Baltimore’s church leadership institute.

Many remembered her personality, passion, faith and love.

They remembered a woman gifted with an adoring husband and two young daughters, Eleanore, 5, and Cecilia, 3.

“They missed out on a life of being raised by this woman of great conviction,” Dave said of his daughters. “That makes me very sad. I sure wish Julie could have been their catechist. I’m going to do my best.”

“She spent the last couple of months thinking of things she wanted to do,” Dave said. “Julie wanted to get back to traveling and enjoying food.”

Julie relished food, Dave said, and was excellent in the kitchen.

“She could bake some things that that belonged on Martha Stewart,” he said.

An uncle, John Hall, remembered a young Julie making a sour face after biting into a lemon bar. She shook and curiosity got the best of Hall. He decided to eat it as well and shook as well.

“What I learned over a period of time was what Julie liked, I liked,” Hall said. “I always made a point of paying attention to whatever was on Julie’s plate. I knew it was going to be good.”

Hall described Julie as someone with a love for performing and endless energy.

Julie, a 1999 graduate of the College of Notre Dame of Maryland, taught at St. Joseph School in Fullerton. She was active in Notre Dame’s capital campaign efforts and served the archdiocese in several capacities, including working in the office of ministry formation and development and as pastoral associate at St. Clare parish in Essex.

She earned a theology master’s degree from St. Mary’s Seminary and University and was given the Regina Russo Hammel ’41 Outstanding Recent Graduate Award by Notre Dame’s alumni association.

Beyond the accomplishments, it was Julie “the person” that Dave Rybczynski fell in love with and married 10 years ago. The musician put aside his life of travel to be with her and raise a family.

“I married her after I turned 30 and said goodbye to her now that I’m 40,” Dave said. “They’re the best years of my life. To fall in love with Julie, above all else… wow.”