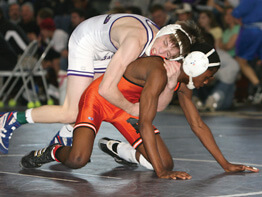 It was clear early on that no one was going to catch the defending champions from McDonogh School, Owings Mills, but it was nip and tuck throughout the two-day Maryland Interscholastic Athletic Association’s 2006-2007 Wrestling Tournament Feb. 9-10 to see who was going to place second.


Archbishop Curley, coached by Greg Kessler, nabbed three first-place finishes as 11 wrestlers placed for points and combined for 221.0 points. The Friars were led by first-place finishers junior Tyler Scarinzi (119), senior Mitch Fenton (130) and senior Sam Burdych (189). All three wrestlers have been on fire this season, each with more than 30 wins and less than half dozen losses.


Picking up second-place honors was senior Mike Kulik (160) who ended the regular season with a 28-7 record.


The Friars were on the edge of a breakout year, finishing 4-2 in regular season, losing to McDonogh by six, 34-28 and to St. Joe by two, 34-32. The depth of the program was key during the season and in the MIAA championships, as the Friars picked up a number of points on fourth-place finishes.


Gaels’ great, Jake Bohn (215) was awarded The Charles R. Gamper Outstanding Wrestler Trophy. Bohn earned his third title in four years and to cap it off, he pinned each of his opponents during the tourney, with an outstanding performance in his championship match over McDonogh’s Doug Schenk. Bohn nailed the pin in just under two minutes. Teams now prepare for the state finals next weekend and the national preps in two weeks.