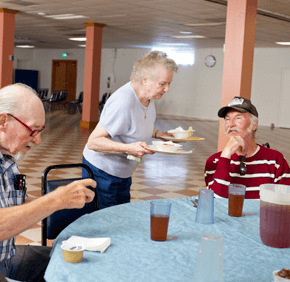 By Maria Wiering
mwiering@CatholicReview.org
ESSEX – Sloppy Joes, succotash, applesauce and potato salad were on the menu June 30 at St. Clare, where volunteers serve meals to people in need every Monday at 5 p.m. Many of their guests are homeless, others are elderly or among the working poor. Some are simply lonely and eager for conversation.
Parishioner Pat Brinker, the meal’s longtime coordinator, welcomes them all.
“Even though people call it a ‘soup kitchen,’ I call it a ‘community kitchen,’” said Brinker, 58. “You don’t have to be homeless to be here; some people just need the company.”
Richard Baublitz III, 28, said the Monday dinners are “a good, good meal.”
Homeless most of his life, he has been eating at St. Clare for a decade. He lives with his elderly parents in the woods, and finds peace at the Essex church, he said.
St. Clare’s meals spring from the Christian call to serve others, said its pastor, Father Jesse L. Bolger. They also exemplify the theme of this year’s Fortnight for Freedom, the “freedom to serve.”
The theme emphasizes the church’s public works as an extension of its worship, thus privileged to First Amendment-protected religious freedom.
Archbishop William E. Lori, chairman of the U.S. Conference of Catholic Bishops’ Ad Hoc Committee for Religious Liberty, celebrated the Fortnight’s opening Mass June 21 at the Basilica of the National Shrine of the Assumption of the Blessed Virgin Mary in Baltimore, where he highlighted the connection between the Eucharist and charity.
The Fortnight will close July 4 with Mass at the Basilica of the National Shrine of the Immaculate Conception in Washington, D.C.
As part of the Fortnight, several parishes in the Archdiocese of Baltimore held service, prayer and educational opportunities on the topic of religious freedom.
Archbishop Lori hosted about 100 people with ties to Catholic social services June 26 at St. Mary’s Seminary in Roland Park, where he and other Catholic leaders outlined concerns about religious liberty and the church’s educational and charitable institutions.
Archbishop Lori spoke against the federal mandate requiring employers to provide insurance coverage for women’s preventative services, including drugs and procedures that violate Catholic teaching, as part of the Affordable Care Act.
Parishes are exempt, but many other Catholic institutions, including schools, universities, hospitals and social service-providers, are not.
Among the speakers was Mother Loraine Marie Clare Maguire, the Baltimore provincial superior of the Little Sisters of the Poor, who are suing the federal government for exemption from the mandate. The Little Sisters run St. Martin’s Home for the Aged in Catonsville.
Mother Loraine was moved to tears as she described her community’s legal battle. In January, they received a temporary injunction from the U.S. Supreme Court. If they do not ultimately receive permanent injunction, however, their U.S. communities are subject to $60 million in annual fines.
“Although we trust in God’s providence, barring a miracle we could never afford to pay these fines,” she said.
Catholic leaders also spoke about other governmental attempts to limit faith-based institutions’ efforts to serve the hungry, immigrants and pregnant women.
For Pat Brinker, who often attends daily Mass at St. Clare, the “freedom to serve” gets to the core of the Catholic faith.
“I’m just here to do what I can,” she said, pointing to a sign quoting Matthew 25: “Lord, when did we see you hungry and not feed you?”
“(What) if one of them is Jesus in there,” she asked, “coming to see just how we treat each other?”
Also see:
Archbishop Lori: Hobby Lobby ruling ‘a wonderful victory,’ but no assumptions on other lawsuits
Supreme Court strikes down ‘buffer zones’ at Abortion clinics
PrevNext