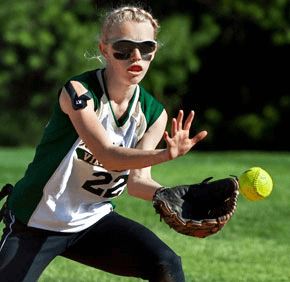 FREDERICK – Abigail Tighe has been playing soccer and softball since before she could read, but scoring goals and home runs wasn’t what excited her.

“Running was the best part,” said Tighe, a senior at St. John’s Catholic Prep. “I love it.”

Tighe, 18, captains the Frederick school’s softball team, having played shortstop for four years. She played on the Vikings’ soccer team her freshman and sophomore years, and has run cross country and track since.

“I’m not a sprinter,” Tighe said. “I love the long, drawn-out races. You get the runner’s high and you just keep going. It’s a Zen thing.”

Last October, Tighe was the B Conference runner-up at the Interscholastic Athletic Association of Maryland cross country championships, covering 5K in 20 minutes, 36 seconds. In February at the IAAM indoor track championships, she lowered the school record for 3,200 meters to 12:38.

“That was the best thing,” Tighe said. “I don’t know where it came from – (I guess) this crazy runner’s high thing.”

In addition to her school practices, until recently Tighe was on a travel softball team and spent most weekends year-round playing up and down the East Coast.

The oldest of three sisters, Tighe said her parents give her “enough of a nudge” to try something new and then decide whether or not she likes it.

“It was my choice to switch over to running,” Tighe said. “My parents encouraged me to do whatever (sport I wanted).”

An A-plus student who has taken six Advanced Placement courses, Tighe has been accepted to Notre Dame, Penn State, Purdue, Iowa State and McDaniel College. She plans to run track and cross country in college and major in aeronautical engineering.

Tighe is a member of the National Honor Society, a student ambassador and participates in campus ministry. She was vice president of the Student Government Association her freshman and sophomore years.

A parishioner of Holy Family Catholic Community, Middletown, Tighe has served as an altar server, lector, member of the choir and the parish’s landscape committee.

A valuable lesson Tighe said she’s learned from John Herr, the school’s track and field and cross country coach, is to try her best and take away something positive from every race.

“It’s about doing the best you can,” Tighe said, “and not always comparing yourself. A lot of the time, that’s enough to beat other people.”

Tighe has applied that lesson to her schoolwork.

“With ACT and SAT scores I tried not to stress too much,” Tighe said. “I don’t care how everyone else scored and if I didn’t get in to a college, it’s because it wasn’t the right fit. It helps keep things in perspective.”