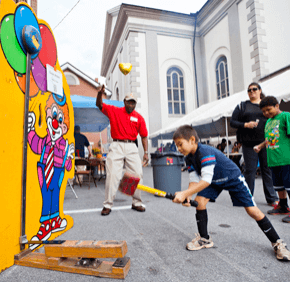 By Maria Wiering
mwiering@CatholicReview.org
Twitter: @ReviewWiering
St. John the Evangelist in Frederick threw a block party Sept. 28 to celebrate its 250th anniversary. The event featured live music, a beer garden, food, children’s games, a dunking booth and petting zoo.
“It was just a fantastic day,” said Father J. Kevin Farmer, the parish’s pastor, who took a turn in the dunk tank at the persuasion of a parishioner who bought $100-worth of tickets.
The event was especially aimed at families with young children, who were well represented, Father Farmer said.
To view a slideshow of the event, navigate the arrows below. Interested in purchasing photos? Click here.
St. John began a celebration of parish milestones last year with a Mass commemorating the 175th anniversary of the dedication of its current church in 1837. The jubilee block party, which also celebrated religious freedom, was the final event marking the anniversaries.
Due to British penal laws that forbade the open practice of Catholicism, the parish began in a parishioner’s home in 1763. The site served as Frederick’s only Catholic Church for nearly 40 years. The first church was built in 1800 by Father John DuBois, who later entered the Sulpicians, founded Mount St. Mary’s College (now University) in Emmitsburg, and became the third bishop of New York.
St. John is the oldest Catholic parish in what is now the Archdiocese of Baltimore; it predates the archdiocese’s establishment by 26 years.
Also see:
Pair who led St. John’s Catholic Prep move to Buckeystown honored
PrevNext