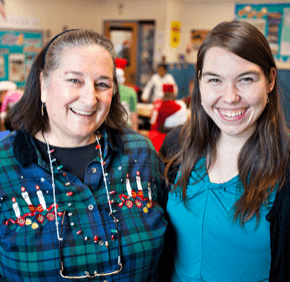 By Paul McMullen
pmcmullen@CatholicReview.org
FREDERICK – Geraldine Gramil keeps Katherine Shields grounded.
Shields energizes Gramil.
Amid all of the anecdotal and quantifiable evidence of mounting pressure on the teaching ranks in the 21st century, the fourth-grade team on the second floor of St. John Regional Catholic School provides a lesson on how to flourish by pairing a traditional touch and fresh approach.
The school’s 73 fourth-graders occupy three classrooms, which are led by Lynsey Mullenholz, in her first year at St. John Regional Catholic; generational peer Shields; and Gramil.
No introduction to Gramil was necessary in spring 2012, when Shields, then completing her undergraduate work at Mount St. Mary’s University in Emmitsburg, did her student-teaching at St. John Regional Catholic.
In 1999-2000, Gramil had been her fifth-grade teacher at Mother Seton School in Emmitsburg.
“At first it was odd,” Gramil said, of Shields’ joining the faculty in fall 2012. “She was my student, now she’s my colleague.
“Almost every year I’ve been here, I’ve taken on a Mount intern. I learn as much from them as they do from me. Katherine and Lynsey (Mullenholz) keep me young. They’re so excited, and that makes me excited.”
On the technology front, Gramil said her “younger cohorts are very patient” with her on a modern campus, in its ninth year on Oppossumtown Road.
Conversely, Gramil advises her teaching teammates to slow down when facing new challenges.
“A lot of the insecurities I have,” Shields said, “whether it’s how to deal with parents or a student’s struggles, she’ll say, ‘Take a deep breath.’ She’s seen it all. I think something is big, but in the grand scheme of things, it’s not.”
Karen Smith, the principal of St. John Regional Catholic, said that “the maturity she (Gramil) brings through her classroom experiences is invaluable,” and noted that the combination of perspectives strengthens her faculty.
“That blending of the old and new,” Smith said, “has a positive impact on our students.”
Both Gramil and Shields, meanwhile, talk of their fellow staffers as they do family, which is telling.
Shields, a parishioner of St. Anthony Shrine in Emmitsburg, is connected to the Wivell family, one of the largest in Frederick County, so big it held its Christmas party at Mother Seton School.
Gramil, who worships at St. Joseph in Emmitsburg and the nearby National Shrine of St. Elizabeth Ann Seton, inherited the teaching bug from her mother, Caroline, a member of the Chiapparelli clan that gave its name to a landmark restaurant in Little Italy.
Gramil went to the former parish schools at Our Lady of Fatima and St. Dominic in Baltimore, and attended Mercy High School before her family moved to Bel Air and her mother took her talent to St. Margaret School.
“I remember being a student at Harford Community College, and directing a play for her at St. Margaret,” said Gramil, whose sister, Teri Hall, taught kindergarten at Our Lady of Fatima. “I had a great experience in the classroom as a student, and Mom is another reason I always wanted to be a Catholic school teacher.”
Gramil, who teaches language arts, math and science, earned education degrees at Towson University and Mount St. Mary’s University. Shields, who teaches language arts, math and religion, is working on her master’s at Hood College in Frederick.
They also further their learning between periods, outside adjoining classrooms in a school in which every classroom has its own patron, St. Bernadette for Gramil’s, Blessed Pier Giorgio Frassati for Shields’.
“Katherine will send me an email,” Gramil said, “but I won’t answer on the computer.”
“We’ll talk,” Shields nodded, “when the kids are switching classes.”
Also see:
Gifted students get boost at Catonsville school
Inside sports: Former Mercy basketball coach still on the scene
PrevNext