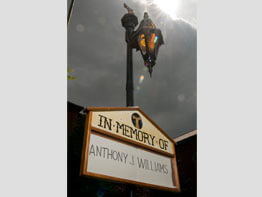 SYRACUSE, N.Y. – For the past few years the Franciscan friars and sisters in Syracuse have been conducting peace vigils to remind people in the community there is an alternative to violence.

“As Franciscans, part of the whole thing is peace and reconciliation,” Franciscan Sister Dolores Bush, one of the organizers, told the Catholic Sun, newspaper of the Syracuse Diocese. “And this is a way to create awareness about violence in our city.”

A recent peace vigil was held in front of the property where 17-year-old Anthony Williams was shot.

Any time there is a murder in Syracuse, the friars send out a mass e-mail to subscribers who request them. Participants in the peace vigil meet at the friary and then carpool to the scene of the murder. According to Sister Dolores, a vigil might have as many as 25 to 30 participants or as few as five or six.

Franciscan Sister James Peter Ridgeo recalled one particularly poignant vigil in front of an apartment complex where a shooting had taken place and residents connected to the victim joined in the prayers.

“They were very touched that we had come to pray for their loved one,” she said.

In addition to the vigils, the Franciscans have a memorial in front of their friary bearing the name of the city’s most recent murder victim.

Conventual Franciscan Brother Ed Falsey, co-director of Franciscan Collaborative Ministries, a community renewal organization, said the peace vigils are simply an aspect of the Franciscans’ mission to witness the Gospel.

“The peace vigil comes out of the witness to nonviolence in the Gospel. We go to the place where it happens with the family or without the family and just offer that as a witness to the Gospel and nonviolence, and the need for not resolving problems by killing each other,” he said.

He also noted that the peace vigils are part of the evolving role of the Franciscans. “Our community has changed its presence here and we’re trying to witness to God and the Gospel and that’s part of where the whole peace vigil comes out of,” he said.

“We wanted to be a witness in the neighborhood where the people live,” he said.

In the long term, Brother Ed sees prayer as integral to the Franciscans’ mission in the community beyond the peace vigils.

“At this point, as a service community we need to witness more in terms of our prayer and our spirituality,” he said.