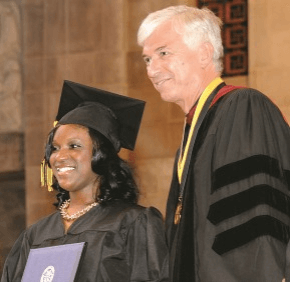 “We’re creating opportunity, and encouraging the formation of productive, faith-filled citizens who will come back and contribute to Baltimore,” he said.

Cristo Rey has gained acclaim for its innovative methods of creating opportunity. Most of the families that send children to the school pay $575 or less annually for a high school education that, since the first graduating class, has resulted in a 100 percent college acceptance rate.

“For a 14-year-old, you need a structure with a lot of strong scaffolding to it, and then you slowly remove that scaffolding to create resiliency and maturity,” Father Swope said.

A video interview conducted by St. Joseph’s Preparatory School in Philadelphia – Father Swope’s alma mater and his new post as a high school president – reveals the likely source of his duality.

His mother, he said, “was of that generation … where there was a responsibility to create opportunities for people,” while his father, who had lost his own parents as a boy but eventually became an executive in the packaging industry, “had worked very hard to lift himself up.”

“They’re both deep chords in me,” Father Swope said in the video interview.

He applies the two principles not only to education in a general sense, but more specifically to the complex dynamics and divides of Baltimore City, which were evident to Father Swope well before the death of Freddie Gray Jr. thrust it all into the limelight.

“The challenge is always finding new jobs for our students,” Father Swope told the Catholic Review. “How is it possible that certain companies can’t or don’t want to work with us or our students? It could be the same folks who are saying, ‘What can we do in the face of the tragic week we had in Baltimore?’ ”

If you want to make a difference in the city of Baltimore over the next 10 years, he added, “you can hire our students and join our mission in changing the city one student at a time.”

Through their four years at Cristo Rey, the students change, too.

The Kairos retreat – a hallmark of the Jesuit high school experience across the country – marks a crux of their spiritual development.

“This is your moment to grow and become more committed to Jesus Christ,” Father Swope explained. “Our students just love it.”

In Philadelphia, Father Swope will undoubtedly spend time with his 91-year-old father, who is still driving.

Father Swope also enjoys driving – golf balls – though he believes in the separation of business and pleasure.

“I’ve never asked anybody for anything outside of the school,” he said. “I enjoy golf, believe it or not, for the love of the game.”