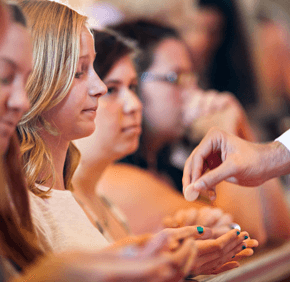 TOWSON – One by one, dozens of formerly Anglican parishioners of Christ the King Church in Towson knelt before Monsignor Jeffrey N. Steenson during a special June 24 liturgy and were welcomed into the Catholic Church.

During a two-hour liturgy filled with music and a palpable sense of joy, 58 people at the former Anglican parish were received and confirmed into the Catholic Church and 54 were received and reconciled – bringing the number of those brought into full communion to 112.

Christ the King was the third church in Maryland and the largest Anglican parish in the country entering the Catholic Church thus far through the Personal Ordinariate of the Chair of St. Peter, established by Pope Benedict XVI to make it easier to welcome former Anglicans into the Catholic Church. The Texas-based ordinariate is equivalent to a diocese but national in scope.

After Mass, Mary Raab stood in the Christ the King vestibule with tears still fresh in her eyes.

“I feel fabulous,” said Raab, 66, a former Evangelical Lutheran and Anglican. “I feel sorrow for the ones who decided not to go (to the Catholic Church).”

In his homily, Monsignor Steenson, the ordinary of the Personal Ordinariate of the Chair of St. Peter, thanked Father Edward Meeks, former rector of Christ the King since its founding in 1996, for his “courage and faithfulness.”

Father Meeks, who has been married to wife Jan Meeks for 41 years with whom he has four children and 13 grandchildren, was one of three former Anglican priests ordained as Catholic priests by Archdiocese of Washington Cardinal Donald Wuerl in Washington, D.C. one day before his church’s reception into the Catholic Church.

Monsignor Steenson, a former Episcopal bishop, called the reception of Christ the King parishioners into the Catholic Church “a day of great rejoicing.”

“Some of us have come from a church which literally could not say what it believed,” he said.

“When I consider the graciousness of God and the generosity of the church to allow me to do this,” Father Meeks said, “it just simply humbles me. The Holy Spirit sometimes has an unusual way of doing things.”

Father Meeks said Christ the King, which owns the church and property, is amending the church’s incorporation to reflect the move to the Catholic Church and the ordinariate. The church will retain ownership of the property.

About 65 people from the 200-person parish have left the church, Father Meeks said.

Several years after his 1969 graduation from the former St. Charles Minor Seminary in Catonsville, Father Meeks said “I concluded wrongly and foolishly that the church had lost her way.”

After his 1996 ordination as an Anglican priest, Father Meeks said, “the Lord set my feet back on the path to the (Catholic) Church.”

In September 2010, Father Meeks introduced the idea of entering the Catholic Church to the congregation.

“It’s really been interesting to see how much joy and enthusiasm this has created,” said Father Meeks, 64. “It has struck a chord in people’s hearts.”

Former Episcopalian Jennifer Tittsworth, 55, was beaming before and after her confirmation.

“Father Ed prefaced everything with the Holy Spirit was moving for unity in the church and to look at that and not look at any doctrinal issues you might have,” Tittsworth said. “I like the thought of what the church teaches about covenant and family. I feel very safe in the Catholic Church.”

To see a photo slideshow from the event, navigate the arrows below.