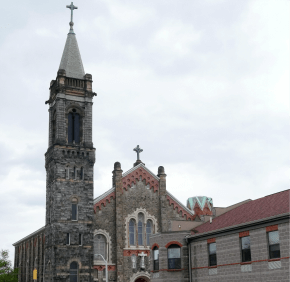 A Catholic hospital will make use of a vacant former Catholic Church as part of its mission to tend to the pathologies that placed dysfunction in West Baltimore in the national spotlight this spring.

Bon Secours Hospital is scheduled to settle June 24 on the purchase of St. Martin Church from the Archdiocese of Baltimore, 10 months after the two parties came to terms.

Sam Ross, CEO of Bon Secours, said that the property on Fulton Avenue will be converted into a community health and wellness center, complementing the Community Support Center across the street which is operated by Bon Secours.

According to Baird, proceeds of the sale will go directly to Transfiguration Catholic Community, which was formed in 2004 by the joining together of the former parishes of St. Martin, St. Jerome and St. Peter the Apostle, where Transfiguration worships.

St. Martin has a rich history.

According to the archdiocese, its cornerstone was laid in July 1865, three months after the assassination of President Abraham Lincoln. Ministering primarily to Irish immigrants and then those of German descent, it served 7,300 families in 1920, when it was the third-largest parish in the Premier See.

As the surrounding neighborhoods became primarily black, its rolls dwindled and it stopped being used for Catholic worship in 2008. For approximately five years, the archdiocese rented St. Martin to an evangelical Protestant community, Cathedral of the Burning Bush Saint Michaels Deliverance Ministries.

The St. Martin property lies south of Sandtown-Winchester, where symptoms rooted in addiction, illiteracy and joblessness manifested themselves in protests and riots in late April, after Freddie Gray Jr. died in police custody.

Bon Secours’ main hospital sits three blocks to the west. In 2011, Ross lamented to the Catholic Review that 80 to 90 percent of his hospital’s admissions come through the emergency room. Asked last month if that rate had improved, Ross said, “We’re still struggling with improved outcomes.”

Ross said the St. Martin property will offer services not currently offered at its existing center on Fulton Street, such as behavioral and dental services.

“When we look at the (St. Martin) church,” Ross said, “we’re looking at programs we currently have that may need space for expansion … workforce development, financial literacy, even our family support center, which has a child development component.

“The major focus would be primary care, prevention and wellness.”

Ross stressed the importance of another anchor in a 21223 zip code rife with abandoned structures.

“Rather than have a large building that may be looked at as blight,” he said, “can we repurpose it and contribute to the community revitalization efforts which we’ve already been doing?”

Earlier this month, Bon Secours was introduced as one of the partners in the Gibbons Commons development.

Ross told the Catholic Review that Bon Secours will spend $5 million to $6 million to renovate the rectory and church that seats 600 at St. Martin, work that is targeted to begin in the fall.

“We’re working with an architect to maintain the integrity of some beautiful pieces while creating useful spaces,” Ross said of the worship space. “We want to preserve as much of that as we can.”

St. Martin’s stained-glass windows have been removed and, according to Baird, will be used in the new church at St. Katharine Drexel in Frederick, which currently worships in the multi-purpose room at St. John Regional Catholic School. Archbishop William E. Lori is scheduled to attend a groundbreaking ceremony there May 31.

“Whenever we can,” Baird said, “we look for the opportunity to re-use relics and artifacts in new construction.”