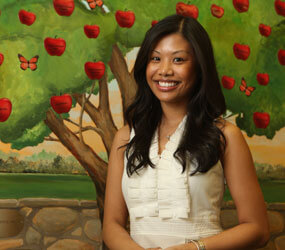 Nicole Ortiz, Miss Maryland United States 2009, is not just another pretty face. She is a highly educated, intelligent young professional woman who confronted the demon of eating disorders, defeated it and is reaching out to help others in their time of potentially life-threatening trouble.

When Ortiz, a lifelong parishioner of St. Luke, Edgemere, won the state beauty pageant, she immediately put her newly found celebrity status to work for her cause, “No Body’s Perfect,” in which she advocates for increased awareness and promotes education on eating disorders.

Having herself overcome the diseases of both anorexia and bulimia, this is a very personal cause. It has since evolved to include health and wellness education as well as esteem building, all of which are important in combating the diseases.

“Being in the public spotlight,” Ortiz said, “gave me a great opportunity to connect with other young women and girls who may be encountering what I went through and help them face and challenge what can be a very frightening and dangerous life experience.”

The 27-year-old is a graduate of Mercy High School and the University of Maryland. She obtained her MBA from Loyola University Maryland, where she also completed an internship in communications and marketing.

She currently works for The Children’s Guild, a nonprofit organization based in Parkville, which is dedicated to serving children and adolescents with trauma disorders who have been traumatized by life experiences or who have autism spectrum disorder and/or multiple disabilities.

While she now works in the Guild’s finance office, she hopes to move into a position that is more people-oriented, where her communication skills can be put to good and helpful use.

She is keen on interacting with people, especially young women, in a helpful way that can have a positive impact on their lives.

Because of her Miss Maryland celebrity status and publicized, successful battle with eating disorders Ortiz, gets a lot of Facebook and e-mail response from girls or young women who have questions “they might not have wanted to ask anyone else and who find my experience inspiring,” she said.

She also hears from parents, especially the mothers of girls who suspect their daughters may have an eating disorder.

“It’s not only scary for the girls, but for the moms too,” Ortiz explained.

It was not too long ago when her own experience was scary.

While she didn’t enter therapy at the Sheppard Pratt Eating Disorders Center until early 2006, when she was 22 and a year out of college, Ortiz said she believed she had suffered from eating disorders since she was about 12.

She attributes her rescue to her younger sister, Farrah, who was very concerned about her and who gently confronted her, persuading her to seek professional help.

“It was hard to hide from my family, and even on my job, the fact that I wasn’t eating and that, among other things, it was difficult for me to concentrate on anything,” Ortiz said. “My conversation with my sister was the turning point for me.”

She started therapy – two or longer hour sessions every Wednesday for three years – and, while it was not easy, she was able to reclaim her life and her health.

While she attributes her recovery in large part to therapy, she also points to her Catholic faith.

She also had the loving support of her parents, Isabelita and Arce Ortiz, both of whom came to the United States from the Philippines before their children were born to work in the medical field.

“My parents have been my mentors,” Ortiz said.

An accomplished athlete in school, Ortiz continues her daily running and gym routines but, as she put it, “not just to lose weight this time.”

And, while she concedes to a certain irony, one of her favorite hobbies is cooking.

“And now I actually eat my own meals,” she said with a grin.

She also enjoys reading, “much more than television,” and is discovering the works of such authors as John Steinbeck and Charlotte Bronte, among others.

Ortiz is dedicated to what she sees as her responsibility “to give back.” While it certainly takes the form of her outreach to others with eating disorders, she is also very involved in her community.

She is active with the Girl Scouts of Central Maryland’s, the USO, Catholic Charities’ Sarah’s House and the St. Vincent de Paul Society.

“Life is really good now, and it’s exciting,” Ortiz said, “and I want other people who have the problems I had to find that good place too. I know they can do it, and I want to help them in any way I can.”