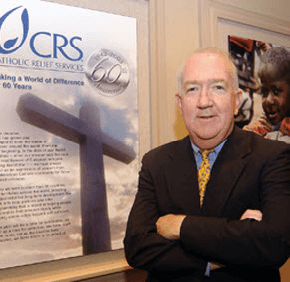 The University of Notre Dame has announced that former Catholic Relief Services President Ken Hackett will receive its 2012 Laetare Medal.

The Laetare Medal is the oldest and most prestigious honor given to American Catholics.

Hackett is to receive the medal at the University of Notre Dame’s 167th commencement ceremony May 20. Recipients are announced each year in celebration of Laetare Sunday, which is the fourth Sunday of Lent. Laetare is the Latin word for “rejoice.”

Hackett, the sixth president of CRS, served in that role from 1993 to 2011. His successor, Carolyn Woo, the former dean of the Mendoza College of Business at the University of Notre Dame, took the helm in December 2011.

Hackett graduated from Boston College with a business degree in 1968, enrolling in the Peace Corps the same year. He has received honorary degrees from several colleges and universities. He continues to serve on the board of the Vatican Pontifical Commission Cor Unum and as an adviser to the U.S. Conference of Catholic Bishops.