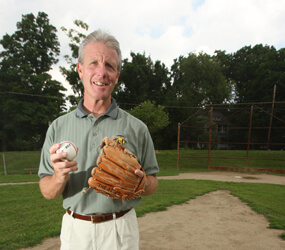 Like any boy playing baseball, Frank Kolarek dreamed of being in the big leagues and maybe even playing in the All-Star Game.

When his career topped out at the Triple-A level three decades ago with the Oakland Athletics organization, the 1971 graduate of Irvington’s Mount St. Joseph High School tucked that goal away.

While the All-Star Game fates of fellow Gaels and major leaguers Mark Teixeira and Gavin Floyd were being decided, Kolarek knows he will be in St. Louis July 14, to step on to the field of Busch Stadium.

The parishioner of St. Mark in Catonsville was a winner of Major League Baseball and People magazine’s All-Stars Among Us campaign and will be honored at the game.

Kolarek will represent the Baltimore Orioles, as he was voted by fans in recognition of his work as founder and president of League of Dreams, a baseball and softball organization that gives children and adults with special needs the chance to play the games in Baltimore City and Baltimore County.

“It’s big,” Kolarek said of the honor. “I wish we could take a busload of our kids. I’d sit out if they could go.”

Kolarek was one of seven children growing up in his family’s southwest Baltimore home. He attended St. Benedict School and served as an altar boy.

As a Mount St. Joseph upperclassman, he became a catcher and made an impression at Catonsville Community College. He transferred to the University of Maryland and shined for the Terps. Never taken in the major league draft, he signed a contract with the Athletics.

After his professional career was done, Kolarek returned to be an assistant coach for Maryland and quickly found out that he loved instructing the game.

Having taken an interest in those with special needs during his playing days, Kolarek also worked for Special Olympics’ international and Maryland branches.

“There’s always someone picked last and just trying to hang out,” Kolarek said. “Now our kids are making opportunities for other kids.”

The League of Dreams concept is taking hold. A park in Fresno, California is being built entirely with special needs accessibility and includes a baseball diamond. Kolarek said his organization will be the baseball and softball provider.

League of Dreams has also received support from many of Kolarek’s friends. Former Oriole shortstop Mike Bordick has been active in the program and is interested in starting a League of Dreams in Maine.

Kolarek says that while he is the face of the organization, his wife, Dorothy, “is the backbone” of the family. Son Adam is a rising junior pitcher for the University of Maryland and wrote a letter to People Magazine to nominate his father for the All-Stars Among Us campaign.

He will accompany his father to St. Louis for the All-Star Game.

Kolarek said he is emboldened by League of Dreams each day.

“It’s inspiring and challenging,” Kolarek said. “What I’ll do, when I can remember to pause a moment, is I’ll close my eyes and just listen. When you do that, you hear kids laughing. You don’t see anybody’s disability.”

“We’re giving our kids the courage,” he continued, “to be encouraged to go up and hit the ball off the tee, to hit coach-pitch, to field the ball and run to first. No matter how long it takes to get there, it’s the friends they make and the experiences they’re having that matters.”

For more information on League of Dreams, visit www.leagueofdreams.org or call 410-719-1641.