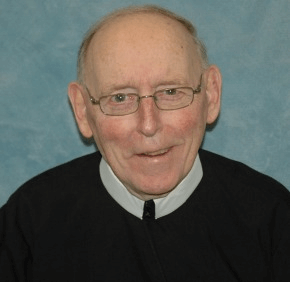 By George P. Matysek Jr.
gmatysek@CatholicReview.org
Redemptorist Father Lawrence E. Lover, a former Baltimore pastor and an expert in canon law, died Dec. 6 at Stella Maris’s St. John Neumann Residence in Timonium. He was 90.
Born in Brooklyn, N.Y., Father Lover was ordained a Redemptorist priest on June 17, 1951, in Esopus, N.Y. Following his ordination, he earned a doctorate in canon law, studying at the Angelicum in Rome from 1952 to 1955. He was proficient in several languages, speaking Latin, Italian and German.
After assignments in Massachusetts, Father Lover was appointed associate pastor of St. Mary in Annapolis in 1969. He served as pastor of Our Lady of Perpetual Help in Ilchester from 1969 to 1975; pastor of Our Lady of Fatima in Baltimore from 1975 to 1981; and pastor of St. Michael in Fells Point from 1983 to 1984.
From 1984 to 1993, Father Lover was the vicar of his religious community’s Baltimore Province, returning to Our Lady of Fatima in 1993, where he served six years as associate pastor. He then returned to his provincial house in Brooklyn, N.Y., before health challenges required his relocation to Stella Maris in 2010.
“He was very likeable and pleasant to be around,” said Redemptorist Father Richard Poetzel, associate pastor of Our Lady of Fatima. “A couple people mentioned  to me that during the entire time they knew him, they never saw him get angry or upset about anything.  He was very level-headed.”
As a young man completing his novitiate, Father Love wrote that it was the “promptings of divine grace” that gave him his “wonderful vocation” to the priesthood.
“Only the all-merciful God could have strengthened me,” he wrote, according to a news release provided by the Redemptorists. “And the infinite love he has shown me I hope to repay to him in some finite way, by giving my whole self to his love, for time and for eternity.”
A funeral Mass will be offered Dec. 12 in Brooklyn, N.Y.
To read more obituary articles, click here.
PrevNext