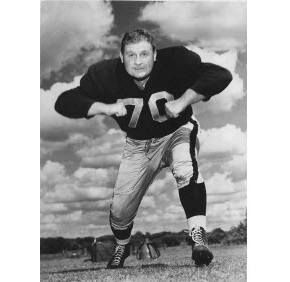 By George P. Matysek Jr.
gmatysek@CatholicReview.org
Right up through his final days, NFL Hall of Famer and adopted Baltimorean Arthur “Artie” Donovan Jr. was making people laugh.
Father C. Lou Martin, pastor of the Catholic parishes of Glen Burnie and chaplain to retired Colts, visited Donovan at Stella Maris in Timonium a few days before the much-loved former Colt succumbed to a respiratory illness Aug. 4 at age 89.
“He could only whisper,” Father Martin said, “but he would make facial expressions like he was dying to get out of the hospital. He was still kidding around – rolling his eyes. He was always ready to see the humorous side of things.”
Donovan’s ability to raise the spirits of people of all walks of life may well be as much a part of his legacy as his storied athletic career.
An Irish-Catholic Bronx native who served in the Marines during World War II, Donovan played for Boston College after the war. He broke into the NFL as a 26-year-old rookie in 1950 with the Baltimore Colts. That team folded after a year, and Donovan played for the New York Yanks in 1951 and the Dallas Texans in 1952.
Watch a Youtube video of Donovan on the Tonight Show with Johnny Carson.
He returned to Baltimore in 1953 to join a new Colts franchise – appearing in five Pro Bowls and entering the Hall of Fame in 1968 as one of the best defensive tackles of his era.
After his retirement, Donovan gained a national following as a jokester and gifted storyteller, appearing on national shows including “Late Night with David Letterman” and local sports programs.
Donovan opened his 1987 autobiography, “Fatso,” by noting that his mother was probably rolling in her grave laughing at the notion of her son writing a book.
“The last book I read was the Baltimore Catechism,” he joked.
Donovan, who attended Catholic schools in New York, was a good friend of several priests in the Baltimore archdiocese, including Father Martin and the late Monsignor Martin Schwalenberg, former chaplain to the Colts and the Baltimore Orioles.
In a 2000 interview with the Catholic Review, Donovan recalled taking a trip with Monsignor Schwalenberg. Knowing the priest was assigned at a Pikesville parish located near popular delicatessens, Donovan asked the clergyman to bring some lunchmeat on the trip.
“He didn’t have anything with him,” Donovan told the Catholic Review. “But when we arrived, Father Marty opened up his briefcase. He had about $100 worth of salami and beef stuffed in there!”
Father Martin remembered that he knew he was “in” with the larger-than-life Donovan when the legendary beer drinker and hot dog connoisseur offered the priest a can of Schlitz.
“He had a heart of gold,” Father Martin said. “He loved Baltimore and, even though he was from New York, he never looked back. This was his home.”
Father Martin said Donovan had a natural range of human emotions. He recalled when Donovan gave a speech for the Ed Block Courage Awards. When the football legend couldn’t get a copy of the speech out of his pocket, he let loose an expletive and decided to wing it.
“His knees were knocking, but you would never know it,” Father Martin said. “He gave a good speech. He was wonderful.”
Father Martin said Donovan took his faith seriously and generously supported charitable causes.
“He used his notoriety for the good and he was OK with that,” the priest said.
The former football player joined several other retired Colts in volunteering several times at Baltimore’s Franciscan Center. He was a featured speaker at the Maryland March for Life, led the 1993 Memory Walk for the Alzheimer’s Association and participated in other fundraisers. He volunteered, he told the Catholic Review in 1993, “because I’ve been very lucky,” adding that he counted his five children among his blessings.
“You know, us Catholics, the only time we pray hard is when we have a disaster,” he joked.
Donovan’s funeral will be offered at his home parish of the Cathedral of Mary Our Queen in Homeland. Details are pending.
Monsignor J. Bruce Jarboe, rector of the Cathedral of Mary Our Queen, gave Donovan the anointing of the sick a few days before Donovan died.
PrevNext