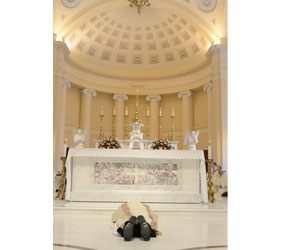 It was a moving day indeed for Father Warren Tanghe, a former Anglican priest of 37 years, as he was ordained to the Catholic priesthood at the Basilica of the National Shrine of the Assumption of the Blessed Virgin Mary June 24.

“My feeling is I am again who God meant me to be,” said a smiling Father Tanghe just moments after he was ordained by Archbishop Edwin F. O’Brien.

The All Saints Sisters of the Poor, a former Anglican convent which journeyed to the Catholic faith as Father Tanghe served as their chaplain, had front-row seats in the historic church as they witnessed the ordination ceremony.

“It’s the culmination of a long journey for him and for us,” said Mother Christina Christie, whose convent was received into the Catholic Church, along with Father Tanghe, Sept. 3, 2009. “It’s just right and the Lord has blessed him.”

She said the mood of the day was very deep and difficult to put into words, but noted that “there is just so much thanksgiving.”

“The designation of this celebration of the birth of John the Baptist as a solemnity suggests that the Baptist ranks high in the roll call of saints,” said Archbishop O’Brien. “In fact, our liturgy celebrates only two other births so solemnly – those of Jesus and Mary. And today’s celebration dates back as early as the fourth century.

“We give such high honor to John the Baptist because Jesus did so: Among all men born of a woman, there is none greater than John the Baptist,” proclaimed Jesus. As does his message, the prophetic message that Jesus took up from John while the Baptist was in prison – Repent, the kingdom of God is at hand.”

Several hundred onlookers were present as Father Tanghe participated in the tradition-rich ceremony. The priest candidate lay prostrate in the sanctuary as a sign of submission, humility and dependence upon the mercy of God, as the congregation solemnly chanted the Litany of Saints.

Then, in an ancient sign, the archbishop placed his hands on Father Tanghe, silently conferring the gift of the Holy Spirit. Fellow priests walked past Father Tanghe, solemnly repeating the act in a fraternal gesture of solidarity.

After the prayer of ordination, Dominican Father Carleton Parker Jones, pastor of Ss. Philip and James in Charles Village, invested Father Tanghe with the stole and chasuble.

Afterward, the archbishop anointed Father Tanghe’s palms with the sacred chrism and then presented him with bread and wine from the faithful for the celebration of Mass.

The archbishop then gave the newly ordained Father Tanghe the fraternal kiss, an act which was repeated by those priests present.

During his homily, the archbishop told Father Tanghe, “Your priestly ordination will make you an instrument in God’s hands.”

He spoke of Father Tanghe’s transition from the Anglican Church to the Catholic faith and of the support Father Tanghe has received from St. John the Evangelist, Severna Park, where he has resided and served.

“The archbishop’s words were moving,” said Father Tanghe as he reflected on the ceremony. “And when his voice broke during the prayer of consecration, I was crying.”

Donna Boyko, office manager of St. John, said for her, the fraternal kiss offered by all those priests present was the most moving part of the ordination.

“I just think that is such a chilling and beautiful moment of the ordination,” she said.

She described Father Tanghe, who has been assigned to Church of the Resurrection in Ellicott City, as wonderful and said, “He will be an outstanding priest for the Catholic Church and we will truly be blessed.”