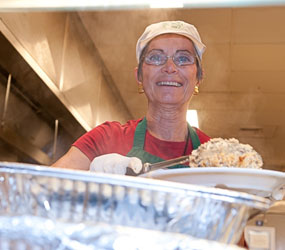 But the mislabeled “soup kitchen,” which doesn’t even serve soup, does much more than simply feed the hungry. It provides a variety of services to help them put broken lives back together, everything from an AA meeting for those struggling with addiction to job placements for the once-middle-class employee who has been laid off and lost a home to foreclosure.

Perhaps its greatest service is that of simply caring – serving a complete meal in a civilized setting to guests who are treated with kindness and courtesy.

“It is as much about the hospitality as the food,” said Marianne O’Donnell, director of the Division of Community Services for Catholic Charities, which runs Our Daily Bread, adding that guests “tell us sometimes we’re the only people who ask how they are.”

The pleasant dining room at Our Daily Bread, which serves a hot meal to 500 to 700 people daily from 10:30 a.m. to 12:30 p.m., is bathed in natural light. Guests sit at round tables and are served by volunteers. They can choose a casserole served with salad or vegetables, bread and dessert, or they can opt for a vegetarian plate, which might feature macaroni and cheese or tuna, salad, fruit and hardboiled eggs.

As they leave, every day they face another choice: They can walk on out, which is fine, or they can stop at the hostess stand, where someone asks if they need help with other services. If they want help, they are assigned a case manager.

“We do intake to find out what their needs are,” O’Donnell said. “We sit down and figure out what benefits they’re eligible for, and we can help them apply online.” Two of the major issues that result in homelessness are employment and affordable housing.

Guests also pass an open lobby filled with computer stations where people can search for and apply to jobs online. The first floor offers office space, including phones and computers, to government agencies and other service providers, so that guests can access needed services all under one roof.

Homeless adults can apply to Christopher Place, an employment academy that offers a three-month program of classes as well as a place to stay. Or guests can access a one-week employment readiness program that teaches life skills such as how to interview and apply for jobs.

Bill McCarthy, executive director of Catholic Charities, said, “It’s not just a meals program – it’s a movement, a movement to not only feed the hungry but to give the poor and hungry an opportunity to regain their lives. That’s living the Gospel.”

Michelle Smullin, 34, of West Baltimore, started in recovery 16 months ago and recently transitioned from a treatment center to transitional housing. She comes for lunch five days a week at Our Daily Bread and then attends an Alcoholics Anonymous meeting there.

“Everyone down here is so nice,” she said. “It helps you stay focused to have a full belly. I like eating with people.” Although she gets some government assistance, including food stamps, “everything I get goes to rent. Coming here really helps.” While she’s waiting for her meeting, she uses the computers to look for work.

Gino Henderson, 50, who took early retirement after working for Amtrak, has been on both sides of the table at Our Daily Bread. He’s used its meals to make ends meet when the faltering economy left him without construction work, and now he volunteers.

“I appreciated everything they were doing, so I started volunteering,” he said. He provides breakfast to the residents of Christopher’s Place on Mondays and Tuesdays and “I still come in the other three days a week in case someone doesn’t show up.” In the evenings, he mops the floors.

“It’s giving back,” he said. “I was on that side – I’m still not working. I’m healthy and I have a roof over my head – God has blessed me that way.”

He has empathy for those he serves. “Being out of work and being out here I know a lot of these people,” he said. “You never know how you can make a person’s day with a kind answer, a patient answer.”

An army of volunteers

What makes Our Daily Bread work is the work of volunteers, everyone from Scout groups making peanut butter and jelly sandwiches to servers to employment development assistants.

Throughout the Archdiocese of Baltimore, volunteers make casseroles, usually for their church, which are then delivered to Our Daily Bread.

Some parishes like to provide a special meal; Immaculate Conception regularly provides a Sunday supper of meatloaf, potatoes, salad and milk, and a neighboring Episcopal church contributes homemade desserts.

Some volunteer by soliciting and picking up donations of sugar, coffee, tea and day-old bread and desserts, and schools contribute with canned-food drives.

In the summer, farmers and farmer’s markets donate fresh produce – even Mayor Stephanie Rawlings-Blake has donated produce from her garden.

Some 30 servers are needed daily in the dining room just to serve lunch, and lunch is always served – even in the blizzard. In fact, in 30 years, through record snows and water main breaks, Our Daily Bread has managed to serve its meals.

“I want to say thank you to the tens of thousands of volunteers – without them we wouldn’t be able to do what we do,” McCarthy said.

Wearing a green apron, Jackie Spelman pauses between ferrying plates to tables, something she’s done every Thursday for 24 years.

“I heard about it on TV many years ago, and I was looking for something to do,” the St. Isaac Jogues parishioner said. “I love it. The volunteers are wonderful and the guests just couldn’t be nicer. It gives you a lot of gratification. It grounds me every Thursday.”

“I’m retired – I was in the computer field, so I volunteer in both,” he said. “The reality is it’s something that’s an intangible benefit; you don’t measure it in dollars.”

Diane DeSimone, a parishioner at St. Joseph in Sykesville and self-proclaimed “foodie,” has been volunteering since 1981.

“They asked for volunteers to help make casseroles,” she said. “I went from there to coming down to serve them. I love it – I love to cook and I just feel connected with serving. I’ve done it all; I’ve served, I’ve cleaned pots. It really is great.” Now her husband, Paul, makes the casseroles while she’s downtown.

“It’s a blessing and it keeps me grounded,” said Dell Alston, a retiree who was a former major-leaguer with the Yankees. “It means more to me than it does to them.” Eight months ago, he underwent double bypass surgery, but soon returned to serving at Our Daily Bread.

Our Daily Bread started in the 1970s, when homeless people asked for something to eat at the kitchen door of the rectory of the Basilica of The Assumption on Cathedral Street. The staff there would give them something. But the need quickly overwhelmed that support system, and the Basilica parish and Catholic Charities created the first Our Daily Bread in a storefront at 17 W. Franklin St. Even back then, volunteers provided casseroles.

A new, larger facility later was opened on the corner of Franklin and Cathedral Street that could serve more than 800 guests a day. But it lacked the capacity to provide the continuum of services needed to combat hunger and homelessness.

The current facility, located on Fallsway on the east side of the Jones Falls Expressway, allows Catholic Charities to do much more than simply serve food. Opened in 2007, the large building includes housing for Christopher’s Place residents, offices and classrooms. Although it’s much brighter, the dining room is the same size as in the old building – guests and volunteers alike wanted to maintain its intimate feeling, rather than creating a cafeteria-type setting.

Our Daily Bread will officially celebrate its 30th birthday on June 1 with a prayer service and reception.

Just as calling Our Daily Bread a soup kitchen fails to give a complete picture, so, too, does the stereotype of the guests as homeless. Although, certainly, some are mentally ill, homeless or struggling with addiction, others are victims of the economy – despite having college degrees and lengthy work histories.

Many who eat at Our Daily Bread are the working poor, who find their wages just don’t reach to the end of the month.

McCarthy points out that 11 percent of Marylanders, some 643,000, receive food stamps.

He recalls one high school volunteer who shared a memorable moment with McCarthy. “There was a woman she had seen all week, and the woman walked past her and then turned to her and said, ‘I wasn’t always this way. I had a job, I had a condo in White Marsh, and when I lost my job I lost my condo.’ “

McCarthy noted that Our Daily Bread tries to anticipate future needs and keep addressing them.

“We may need to be in the business of not just placing people in employment, but creating employment,” he mused. “And we need to do more with affordable housing.”

He knows, too, that the gospel calls us to love our neighbor as ourselves.

A Statistical Slice of Our Daily Bread

7 million meals have been served in the past 30 years.

1.5 million volunteer hours have been contributed during the past 30 years.