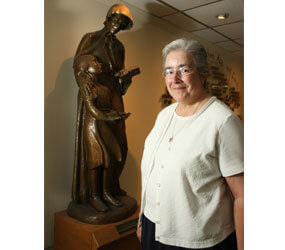 Sister Patricia Anne Bossle smiles at the symmetry of her next assignment.

Into her sixth decade as a Daughter of Charity, she’ll return to Emmitsburg, where the order was founded by St. Elizabeth Ann Seton in 1809. Sister Patricia Anne will research and write grant proposals for that town’s Mother Seton School and the Elizabeth Seton High School in Bladensburg, promoting missions that by now seem part of her marrow.

She has been a teacher, principal and president of educational institutions that carry the Seton name, most recently turning an interim appointment as head of The Seton Keough High School into a six-year stint that ended June 30.

Sister Patricia Anne, 70, went to the old Seton High on Charles Street, did her undergraduate work in Emmitsburg and was a docent at the national shrine to the first native-born saint of the United States.

“That (1978) was one of the best years of my life,” Sister Patricia Anne said, “reading about everything Elizabeth Ann Seton. She became my best friend.”

“I’m convinced,” Sister Patricia Anne said, “that education is the only route out of poverty.”

That position was reinforced in 2000. After 13 years in finance, first as a treasurer for her province, then in the front offices of hospitals in Cumberland and Virginia, Sister Patricia Anne became director of education for Marian House, a northeast Baltimore program which turns around the lives of homeless women.

“That was the only time I ever asked for an assignment,” she said. “I was eager to get back to education. Marian House not only helps women start over, it helps them see their beauty and goodness. … On a different scale, the same thing happens here.”

Sister Patricia Anne was sitting in the chapel at Seton Keough, near the end of the 2009-10 school year.

She talked of growing up in Blessed Sacrament Parish – within walking distance of Marian House – and joked of her five brothers “driving her to the convent.” She became most energized, however, discussing the Seton Keough motto, “Sending Forth Women of Honor.”

“It’s what every institution wants to do, especially Catholic institutions,” she said. “If you die today, can you look straight into God’s eyes? We mess up, we make mistakes, sometimes we’re not too bright in the choices we make, but we find our way back.

“There’s a great goodness in young women, young people, that they don’t get credit for.”

The physical plant was upgraded and a science and engineering track were introduced on her watch, but Sister Patricia Anne might most remember the way the Seton Keough community embraced its Walk for Hope, a student-organized annual fundraiser that began in 2008, after several staffers and students were stricken with cancer.

Sister Patricia Anne has soldiered on through her own maladies. She had a kneecap removed in 1967, and major back surgery in 2004. She walks with a cane, but gains strength from students, a large extended family and her religious order.

“I love being a Daughter of Charity, for 52 years now,” she said. “I saw that warmth from the sisters when I was a student at Seton High, and I’ve never been disappointed. My brothers are wonderful supporters and my best friends, but the sisters have always been there.

“I’ve been challenged by them, and learned from them every day.”