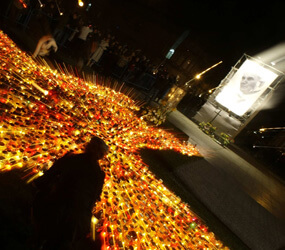 VATICAN CITY – They brought flowers and messages to his grave. They sang songs evoking his memory. And they prayed for his beatification.

The fourth anniversary of the death of Pope John Paul II April 2 was marked by a sense of anticipation following reports that the late pontiff would be beatified on the fifth anniversary next year.

The Vatican has played down those rumors. But among the thousands who flocked to his tomb and gathered in St. Peter’s Basilica for a memorial Mass, the feeling was strongly hopeful.

“There’s all kinds of talk about him being beatified. It’s only a matter of time before it happens. He’s heading so fast toward sainthood that they’re only waiting to give him a little bit more legitimacy, I guess,” said Samantha Coveleski, 22, of Lewes, Del.

Ms. Coveleski was among hundreds of people who jammed the crypt area of St. Peter’s Basilica April 2 to pay their respects at Pope John Paul II’s tomb. They left candles, photos and letters, and murmured prayers in many languages. On the white marble tombstone lay three red roses.

Pope Benedict XVI celebrated the commemorative Mass and said he was praying for “the gift of beatification” for his predecessor. In 2005, Pope Benedict set Pope John Paul on the fast track to beatification by waiving the normal five-year waiting period for the introduction of his sainthood cause.

That seemed to respond to the “Santo subito!” (“Sainthood now!”) banners that were held aloft at Pope John Paul’s funeral.

The initial diocesan phase of the cause was completed in April 2007. Last November a team of theological consultors to the Congregation for Saints’ Causes began studying the 2,000-page “positio,” the document that makes the case for beatification, according to Archbishop Angelo Amato, head of the congregation.

Archbishop Amato told Vatican Radio that once the theological study of the “positio” is completed, the cause will be considered by the cardinal and bishop members of the congregation. If approved, it will then go to the pope for a final decision on a decree of “venerability,” which means the person lived the Christian virtues heroically.

Meanwhile, a presumed miracle through the intercession of the late pope – involving a French nun said to have been cured of Parkinson’s disease – is being studied in a five-step process that involves medical experts, a medical board, theological consultors, the members of the congregation and, finally, the pope.

With the decree of venerability and a confirmed miracle, beatification can take place.

Archbishop Amato emphasized that the Vatican could not promise a timetable for all this. The fact that the Vatican is expediting the cause doesn’t mean “haste or superficiality,” but on the contrary demands methodical attention to detail, he said.

Five years from death to beatification may not strike people as “subito,” but it would be a modern record in the church; even for Blessed Mother Teresa of Calcutta, who was described by many as a “living saint” and for whom the waiting period was also waived, it took six years to complete the process.

Still, the Vatican loves anniversaries, and no one has ruled out next April 2 as the big day. Polish Cardinal Stanislaw Dziwisz of Krakow, personal secretary to the late pope and one of his biggest beatification boosters, said in March that the process would be completed in a few months.

A 9-year-old Polish boy from Gdansk, suffering from cancer of the kidneys and unable to walk, was brought to the tomb by his parents, Cardinal Dziwisz said. When they left St. Peter’s, the boy told them, “I want to walk,” and began walking in good health, he said.

Vatican officials are not publicizing what are said to be 251 “inexplicable” healings or other events attributed to Pope John Paul II’s intercession, and which have been filed away. Like Archbishop Amato, the officials emphasize the seriousness of the study being undertaken and insist there are no foregone conclusions.

The Vatican newspaper, L’Osservatore Romano, has marked this year’s anniversary with the same serious tone, saying sainthood was more than the elevation of a popular personality.

“The cry of ‘Santo subito!’ after the death of John Paul II had strong meaning. But its repetition by the media is mistaken: The official recognition of sainthood must be connected to the church’s process of sanctification,” said a front-page article April 2.

The same article related an interesting anecdote about the relationship between Pope John Paul and Pope Benedict who, as Cardinal Joseph Ratzinger, served more than 23 years under the late pope as head of the doctrinal congregation.

When meeting to review the drafts of important documents with his top collaborators, it said, Pope John Paul would sometimes sit back at the end of the conversation and say: “We need to go back to this topic again. From his expression, I can see that Cardinal Ratzinger is not fully convinced. We need to reflect some more.”

At the memorial Mass, Pope Benedict underlined the thematic continuity between the late pope and his own pontificate. Then, like many before him, he went down to the pope’s tomb and knelt in prayer.