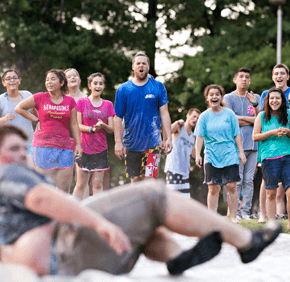 By Maria Wiering
mwiering@CatholicReview.org
SPARKS – Teenagers bobbed in the outdoor pool at Monsignor O’Dwyer Youth Retreat House July 24, calling “Marco Polo” and playing other water games at the High School Leadership Institute, or High LI, a weeklong program organized by the Archdiocese of Baltimore.
Among them were four youths from Glen Burnie parishes, where a committed cadre of high school students serve as peer ministers, assist with religious education and make the church a social hub.
The parishes’ youth group is central for scores of Glen Burnie teens, but it’s invisible to some parishioners, said Father C. Lou Martin, pastor of the Catholic Community of Glen Burnie, which includes Church of the Crucifixion, Church of the Good Shepherd,  Holy Trinity and Monsignor Slade Catholic School, a pre-kindergarten-to-eighth-grade school.
Because many of youths’ families attend a Sunday “family Mass” in the school gymnasium, Catholics who worship at the parishes may not be aware of the community’s vibrant faith formation program and youth group.
“It’s like a secret, but for those who are part of it, it’s ingrained in the culture,” said Father Martin, who became pastor of the parishes last year.
The Glen Burnie parishes have shared faith formation and youth ministry programs for three years. Parish leaders hope to make the youths’ presence better known and expand ministries for young people.
Dan Miller, the director of religious education, learned early in his career that youths are not the future of the church – they’re the church now, he said.
“They’re just as active – if not more active – than a lot of adults,” he said.
Especially engaged teen leaders could spend two to four nights per week at parish activities, said Glen Burnie youth minister Joyce Pagan. A core group meets regularly to plan events, assist with younger students’ faith formation classes and vacation Bible school, and lead peer ministry activities for confirmandi. They participate in a Summer Madness program as well as the National Catholic Youth Conference and the Baltimore Youth Catholic Conference, alternating biennial youth gatherings.
Some youth events are purely social, such as a “water wars” game night at Holy Trinity July 28. They fortify friendships that support the youths as they face teenage pressures, such as school-related stress and bullying, Pagan said.
Brian Lathroum, 16, said the youth group “is like a family.”
“If any of us needs help, the rest of us are surrounding them in two seconds,” he said.
Kara Diaz-Copeland agrees, describing a “bond” that exists between youths who went through confirmation preparation together and return to help the next class as peer ministers. She said that for many youths, the relationships last beyond graduation.
“I’m looking at colleges out of state, and that’s the one thing I’m dreading: I don’t want to leave our youth group,” she said.
Youth ministry events are separate from the community’s faith formation classes, but many students participate in both. Faith formation classes draw about 60 students per grade.
Patrick Palazzo, 17, said the youth group mixes faith with fun. A rising senior at Archbishop Curley High School in Baltimore, he didn’t expect to become interested in programs such as High LI, but the youth group changed his mind.
“I never thought I’d do that, but after being in confirmation (classes) and going on retreat, I’ve come to realize that I really enjoy doing these things and being part of the church,” he said.
Also see:
Beauty beneath the grime: Basilica’s Stations of the Cross undergo restoration
City parishes use Dragon Boat races to forge bonds, help charities
Sellinger, Bramble assume leadership roles for Archdiocese of Baltimore schools
PrevNext