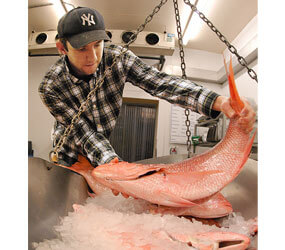 ORLANDO, Fla. – Sal Versaggi is no stranger to battling disaster.

As one of the owners of Versaggi Shrimp Co. out of Tampa, his shrimp boats have worked up and down the west coast of Florida – including areas in the Diocese of Venice – through hurricane after hurricane.

“God has a special affinity for fishermen,” he said. He has to, when they’re “at the mercy of nature and what the winds and climate and current does.”

But even Versaggi doesn’t know what’s going to come next.

As with many disasters both natural and man-made, BP’s Deepwater Horizon oil spill in the Gulf of Mexico has Catholics in Florida’s fishing industry praying and scrambling to survive.

Looking at Louisiana – whose oyster beds have been closed west of the Mississippi thanks to the spill, and whose fishing industry has been severely crippled – and the hundreds of dead fish washing ashore in Dauphin Island, Ala., the spill worries men and women who work on boats, in warehouses, in restaurants and in retail in a way that no hurricane has for years.

“The people are looking at a business that has taken them 25 years to build – losing it in one fell swoop,” Bob Jones, executive director of the Southeastern Fisheries Association, told The Florida Catholic, newspaper of the Orlando Diocese and other Florida dioceses.

“Everybody is preparing, getting ready in case it does come, finding out ways they can get help,” said Dominican Sister Jeanne Drey of St. Patrick Parish in Apalachicola. Hers is one of the many fishing communities on the panhandle that faces ruin if the oil washes ashore in Florida.

Versaggi, a member of Sacred Heart Parish in Tampa, knows fishermen must often trust that natural and man-made disasters are part and parcel of life and God’s plan, and said that his business always has a disaster plan of its own.

“Most people of faith talk to God in moments like this, asking for protection and help – no matter if you’re Catholic, Protestant or Jew,” he said.

Across Florida, seafood workers are hoping the spill could be contained before it enters the Gulf Stream currents, which would take the oil down the west coast of Florida, through the Florida Keys and up the East Coast, according to Versaggi. Much of the company’s shrimping income this year is from the Keys, where boats from the company are currently working.

“If it gets in the current, it’s pretty powerful – it moves around 6 knots,” said Versaggi. “If something gets in there, it’ll get swept right down to the south, and the Keys have potential for damage.”

According to Jones, the fishing industry from the Gulf to the Keys is small and interdependent, and Florida is already feeling negative effects from the spill.

A good portion of the oysters, shrimp and crabs consumed in Florida come from Gulf waters around Louisiana, he said, and the oil spill – which made landfall at New Harbor, La., May 6 and continues to roll ashore on the Louisiana coast – might cripple the oyster industry there for years.

“When they shut down and can’t send over here, it has a domino effect,” Jones said.

The oil spill will have more than an economic effect on Florida’s fishermen and seafood workers, Jones continued. “The mental anguish is beyond the pale,” said Jones.

“All the people who are fishermen, as well as the people in the charter boat business, everybody else, they know that if in fact the oil well isn’t stopped, plugged up, and if the amount of oil potentially comes to our bays and estuaries, our corals, our grasses, then Florida as we know it will be totally changed,” Jones said.

The estuaries serve as an incubator for young fish and shrimp, said Jones, and while they grow, they’re often “totally vulnerable.” Without the estuary, Jones explained, entire generations of grouper, crabs and shrimp could be wiped out, and entire fishing businesses with it.

Carpenter, a Catholic, is a salesman with Water Street Seafood in Apalachicola, one of the panhandle’s largest wholesale distributors. Seafood from that warehouse ends up in stores throughout Florida.

“Some of the dispersal agents (being considered) are four times more toxic than the oil itself, and nobody really knows what’s going to happen. We’re all worried,” he said.

Consumers are already concerned about the safety of seafood, despite assurances by Florida officials that what is currently being harvested has not been affected by the spill. Restaurants and retail seafood outlets have begun looking to suppliers elsewhere in the country, even as far away as Washington state.

Across the board, Catholics who work in the seafood industry were advising their customers and clients to pray, and also to pitch in, if they can, with cleanup efforts.

The fishermen “wanna fish, they wanna be on the water, and they’re the ones who are going to be hurt first and hurt the most,” Jones said.

“I think for the people who are blessed to believe in a higher power,” he said, “the faith is always there, and they can take solace in times of disaster, in happiness and grief and they can feel comfort just talking to God.”