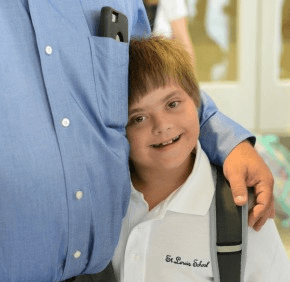 “Each one of you should make up your mind that this is going to be the best year of school ever,” he told students at a morning assembly before the day began in earnest.

The minds of the Ory Docal and Kathryn Rosewag were likely already made up. The two students, both of whom have Down syndrome, were for the first time fully embracing their families’ Catholic schooling traditions.

As they climbed the steps to the school’s main entrance, accompanied by their families, they were all smiles.

Excited and ready to learn, St. Louis School, Clarksville, student, Kathryn Rosewag, center, is escorted by her sister Brooke, right, and schoolmate, Katherine Steir, Aug. 29.  (Kevin J. Parks/CR Staff)
“I’ve had a Catholic education from kindergarten through high school, and so has my wife, and it’s been great for us and our kids,” said Orlando Docal, Ory’s father. “We wanted our son to have the same experience.”

“To have an education based on faith is so awesome,” added Debbie Docal, Ory’s mother.

The Docals have been parishioners of St. Louis Church for 24 years; their daughters Maria, Theresa and Olivia – now a pediatric cardiac nurse, college student and high school student, respectively – all completed elementary school at St. Louis.

Ory – who enjoyed zip-lining and rappelling among other pursuits over the summer – will be joining the third grade. His father said Howard County public schools had treated his son exceedingly well, but St. Louis felt like home.

“We’ve been here so long, all the teachers come up and hug us,” he said.

Ory and Kathryn are attending St. Louis thanks to a collaboration between the school and the Catholic Coalition for Special Education, an organization active in the Baltimore and Washington archdioceses with the mission of ensuring that “children with special needs are able to attend and receive an appropriate education in their local Catholic elementary schools and high schools.”

A grant from the CCSE has allowed St. Louis to establish The Louis IX Program, allowing the school to hire the additional staff members necessary to serve Ory and Kathryn.

“I really felt that they and their families needed to be a full part of our community,” said Terry Weiss, principal of St. Louis School.

“I think we’re going to learn more from these two little ones than they could ever learn from us,” she added.

Francesca Pellegrino, president and founder of CCSE, said she is “absolutely thrilled” and “excited” to see St. Louis open its doors to Kathryn and Ory.

“I’m confident it’s going to be a very successful program, because they’ve taken a good year or longer to prepare,” she said.

Pellegrino, a parishioner of the Shrine of the Most Blessed Sacrament in Washington since 1984, said her experiences raising her own son, now 24, inspired her to launch CCSE.

“I was hoping to get him into a Catholic school,” she said. “Unfortunately, it never happened for Alex, but I continue to do this work because I believe in it.”

She obviously believes in Catholic schools, too, noting that “they do tremendous things with limited resources.”

Like Weiss, she believes that children with special needs give more than they get.

“I think you will find that many teachers say that having these students in their classrooms make them better teachers,” she said. “Students are affected, too. In the end, everybody grows – academically, spiritually and socially.”

Archbishop William E. Lori welcomes students, faculty and staff to the first day of class at St. Louis School in Clarksville Aug. 29. (Kevin J. Parks/CR Staff)
Kathryn Rosewag will join two older sisters at St. Louis as well as a younger brother, who will also be in first grade.

“It’s nice to have everyone in the same place, and she is so excited to be going to school with her sisters, because she didn’t get to last year,” said Matt Rosewag, the father, as he and his wife, Maddie Rosewag, waited for their children to arrive on the bus together.

Matt Rosewag has been a parishioner of St. Louis since 1973 and completed his elementary years at the school before later graduating from Mount St. Joseph High School in Irvington.

He said Kathryn enjoys reading, wrestling (“That’s probably my fault.”) and playing with her sisters.

Archbishop Lori encouraged all St. Louis students to do the same.

“You’re making up your mind to love one another,” he said. “When you love your classmates, and you love your teachers, and there’s a great spirit of cooperation, you’ll wake up every morning and say, ‘I can’t wait to get to school,’ because you’ll love it.”

For more photos and to order prints, visit our Smugmug page here.

Special needs ministries, blessings all around