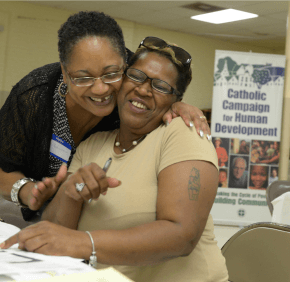 By Catholic Review Staff
Anteing up the Sunday before Thanksgiving in a special collection for the Catholic Campaign for Human Development, Archdiocese of Baltimore parishioners contributed $190,000 toward causes that further Catholic social teaching.
“People in the archdiocese are doing great things in the Catholic Campaign for Human Development,” said Monsignor William F. Burke, archdiocesan director for the CCHD and pastor of St. Francis of Assisi in Baltimore, which hosted an Aug. 23 awards luncheon for the CCHD.
Of the money earlier collected by the archdiocese, a fraction remained local and the rest went to the national CCHD – the domestic anti-poverty program of the U.S. Catholic Bishops – to be redistributed. After that process, the Baltimore archdiocese was able to award a total of $306,000 in national and local grants to organizations dedicated to alleviating poverty.

To be considered for a grant, an organization must have at least half of its board members living below the poverty level.

“These folks are both the decision makers and takers in changing situations to achieve better housing, job opportunities and leadership training,” said Monsignor Adam J. Parker, archdiocesan vicar general, at the luncheon, according to prepared remarks provided to the Catholic Review.

Monsignor Adam J. Parker, vicar general and moderator of the curia for the Archdiocese of Baltimore, standing fourth from left, and Monsignor William F. Burke, pastor of St. Francis of Assisi Church in Baltimore, are joined by representatives of organizations who received grants from the Catholic Campaign for Human Development during an awards luncheon held at St. Francis Aug. 23.   (Kevin J. Parks/CR Staff)

The No Boundaries Coalition, a West Baltimore advocacy group that encourages local leadership, received the largest single grant of $75,000. It was the third year the group – which has an office at St. Peter Claver Parish in West Baltimore – received a national CCHD grant.
Also receiving national grants were the United Workers Organization, $50,000; Baltimoreans United in Leadership Development, $50,000; the Immigration Outreach Service Center, $35,000; Arundel House of Hope, $30,000 (national and local grants); and the Northeast Housing Initiative, $30,000 (national and local grants).
The Youth Empowerment Society, the Baltimore Algebra Project and BRIDGE Maryland received local CCHD grants of $12,000 each.
“We’re hoping to do even more next year,” said Monsignor Burke, noting that parishioners are encouraged to contribute one hour’s worth of their wages to the annual collection.
Lunch was prepared by parishioners of St. Francis. Monsignor Parker, who has traveled to Rome extensively, said the meatballs were as good as those of the Eternal City.
To view more photos and order prints, visit our Smugmug page here.