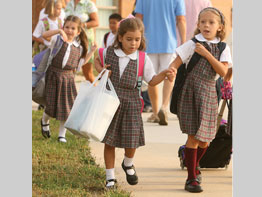 Erin Munchel and Kendall Middlecamp have had their share of milestones over the years, but as they sat on the floor of a noisy school gymnasium Aug. 25, the eighth graders realized it was their final opening day of school at St. Joseph of Fullerton.

Across the Archdiocese of Baltimore, schools opened with students experiencing similar awe, excitement and nervousness. Classmates separated during the summer reunited to launch a new 10-month academic journey.

School hallways, largely silent since June, were once again filled with the sounds of shoes click-clacking across the floor. On the first day of school, each of the approximately 500 students at St. Joseph looked their best in freshly ironed uniforms.

On a hectic first day at St. Joseph, which sits on Belair Road in northeast Baltimore County, there was still time to pause and reflect.

“It’s kind of surprising how we’re already eighth graders,” said Kendall, 13. “I’ve been here since I was in kindergarten and know everybody really well.”

For Erin, 13, there was also a sense of obligation as she observed younger members of the student body.

“You want to set a good example, because I remember coming here and seeing all these (older) kids too,” Erin said of her younger days.

“I think every new academic years brings its own excitement and its own challenges,” Dr. Valenti said. “For students, you hope for them to accomplish growth in their own awareness in their gifts and find spiritual growth. This is truly a partnership between parents, teachers and students.”

“I like that there’s a lot of parent-teacher involvement,” she said. “Everybody’s involved. It’s just a really nice community. There’s a mixture of everyone. I think it makes a difference. We live in a world with all kinds of people.”

As some first graders filed into Saint Joseph, kindergarten teacher Nancy Vogtman helped some of her students from last year locate their classrooms.

The first day of school was old hat for principal Phyllis Karko, who deftly bounced from room to room to welcome students and help teachers organize. She said an atmosphere has been created inside her school building that is unmistakably Catholic.

“We want these children to realize that they have a responsibility when they leave here to make the world a better place,” Mrs. Karko said. “We all are cognizant that we wouldn’t be here if God didn’t sanction us and approve us. We certainly can’t be a Catholic school in this county without lots of prayers and support. We want kids to be thankful of this education that people value.”