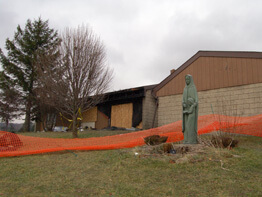 No one was injured in the blaze, which caused thousands of dollars in damage, destroying a portion of the church.

As of press time, Father Hannon said the cause of the fire was unknown, and the deputy state fire marshal was in the process of evaluating the scene.

Father Hullinger was able to recover sacramental records from the church before they were destroyed and the Blessed Sacrament was also rescued from the tabernacle.

“The part of the parish plant that was used for religious education, meeting space, sacristy and liturgy space was heavily damaged by the fire,” said Father Hannon, who has served as pastor for six months. “Books, vestments, computers and many liturgical items were lost to the fire.”

The floor is unstable, wood is hanging from the main beams of the ceiling, the roof has a hole in it where the rooms connect into the main lobby of the church and the windows have all been broken. The office of Mrs. Rawe, director of religious education, was devastated and the body of the church is heavily coated with soot, said Father Hannon.

Mrs. Rawe said she has a few ideas as to where religious education for the children can be held but she has to have a meeting with the catechists before any final plans are made.
“We are in the process of assessing what was lost and what needs to be replaced,” said Father Hannon, who also serves as pastor of St. Peter in Westernport and its mission St. Gabri¬el in Barton, St. Patrick, Mount Savage; St. Michael, Frostburg; St. Joseph, Midland; and St. Mary of the Annunciation, Lonaconing. “We are also waiting to hear from those who know how to assess the damage, what is the actual extent of the damage.”

Although the fire at the church, which serves as a worship space for some 100 families, happened just two days before Christmas, parishioners were notified that services would take place at the Grantsville Elementary School.

Mrs. Rawe said it felt a little strange not to be in the church for Christmas. Fortunately, the poinsettias were still at the florist, so the school gym was decorated with flowers and a manger scene, and the gym was filled with people just happy to be celebrating the birth of Christ.

“We are the parish, not the building,” said Mrs. Rawe. “The people in the area and the pastors in the area have all been very kind.”

The parish has received letters and phone calls from people in the community and other faith communities expressing their concern and prayers for the parish, said Mrs. Rawe.

“Mr. Lynn Newman, the owner of the local funeral home, has generously offered the chapel of his funeral home to us,” said Father Hannon. “The fire at St. Ann’s is, of course unexpected, so the pastoral council has not yet had time to met to make long term plans.”