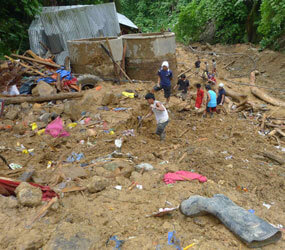 MANILA, Philippines – Residents of a small mining community in the southern Philippines continued mining for gold Jan. 5 despite a landslide that swept through their village and government warnings to evacuate, a Catholic priest said.

Father Reynaldo Biliran of the Tagum Diocese told the Asian church news agency UCA News that the government feared the land had become unstable after the predawn landslide claimed at least 25 lives, but villagers refused to budge.

“The church has not been remiss in reminding them of the danger of mining, but you can’t really blame these poor people for staying there. It’s their livelihood,” he said.

More than 100 people were missing after the landslide, the government reported.

Benito Ramos, head of the National Disaster Risk Reduction and Management Council, said heavy rain or a predawn quake were possible causes of the landslide in Pantukan village in Compostela Valley province.

“The quake, although relatively weak, intensity 3, may have affected the ground already saturated by rain,” Ramos said.

“A military unit is in the area, but they are basically digging with their hands,” he added.

The landslide occurred about just over a mile from the scene of another landslide in April in which more than a dozen people were killed, and one in 2009 that killed 26 people.

Acting on the advice of government geologists, local officials ordered the evacuation of all Pantukan gold rush areas after the April disaster.

Soldiers were already in the area, but search-and-rescue operations were hampered by the rugged terrain, said a government spokesman.