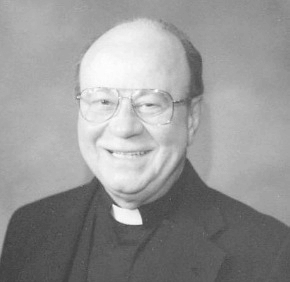 By Erik Zygmont
ezygmont@CatholicReview.org
Monsignor John C. Collopy, who served as a priest of the Archdiocese of Baltimore for nearly 59 years, was remembered for his immense personal warmth and commitment to prayer. A funeral Mass will be offered May 14 at St. John the Evangelist in Long Green Valley for Monsignor Collopy, who died May 10 at age 85.
“He loved people,” remembered Father Alphonse Rose, who was ordained with Monsignor Collopy in 1956 at the Basilica of the National Shrine of the Assumption of the Blessed Virgin Mary in Baltimore. The two remained close friends through the decades.
“People were drawn to (Monsignor Collopy) because of his warmth and friendliness,” Father Rose said, adding that most people knew Monsignor Collopy as “Father Jack,” and that he was very prayerful.

“He brought many people to Jesus that way,” Father Rose said. “It was clear to people that this man believed what he talked about.”

Baumiller told the archdiocese that as a boy Monsignor Collopy would see a movie in the theater and then run home to tell his sister all about it, so she could share in the experience.

Father Rose noted that Monsignor Collopy’s health waned in the final years of his life, and “he suffered a great deal.”
“But he always, always – pain or no – was smiling, present and welcoming to the people who came to him,” Father Rose said.