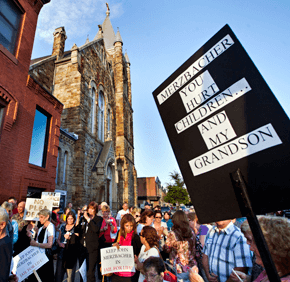 “That’s the very room I was raped in,” Elizabeth Murphy said. She was pointing to a tall window on the exterior of the former Catholic Community School of South Baltimore, just off the school’s main entrance. The window led to a storage room, a space where her middle school English teacher John Merzbacher abused her over the course of three years in the 1970s.

A June 6 vigil with about 200 former classmates and their supporters brought Murphy back to the site June 6. She organized the vigil with other victims as part of their efforts to keep Merzbacher in prison.

Merzbacher taught at the school from 1972 to 1979. He was convicted in 1995 of six accounts of child rape and sexual abuse against Murphy, who was 11 when he began to abuse her. Merzbacher was sentenced to four concurrent life terms plus 10 years. He claimed innocence, and appealed the conviction several times but failed to overturn it in state courts.

In 2010, a federal judge ruled that Merzbacher must be given an opportunity to accept a plea deal that his defense attorneys did not inform him of during trial. The Maryland attorney general’s office filed a legal brief in early May with the 4th U.S. Circuit Court of Appeals arguing against granting Merzbacher the opportunity to consider the deal. Merzbacher’s attorney plans to file a brief in mid-June.

The Catholic Community School closed in 2009; the building now houses The Baltimore Montessori school. It sits next to Our Lady of Good Counsel church and rectory on the 1500 block of E. Fort Avenue, across the street from Latrobe Park. Murphy said she was playing there with friends when Merzbacher first called her to his classroom, where he served her sherry before raping her with a gun against her head.

“I look at that brick and mortar and think someone should tear it down. Too much evil occurred inside that building for it to remain standing. It’s heart-wrenching to me,” Murphy said. She hoped that the former students’ presence could help make the space “holy,” she said.

Vigil participants held signs protesting the plea deal and calling for Merzbacher to stay in prison. Steve Melnick, who came from San Diego for the vigil, held a homemade sign reading “pray for us.” He said Merzbacher first sexually abused him at a Christmas party in front of other students, and abused him for several years after that.

Prayer, especially the rosary, helped him heal, he said.

Former Merzbacher student Dawn Steinhice Grantland said some of her classmates have kept their abuse secret for nearly four decades. “One by one, when they see somebody else come out, it gives them the strength to tell what happened to them,” she said.

Several former students stood on the steps of Our Lady of Good Counsel’s rectory and offered prayers, encouragement and a desire for healing and justice. A hymn played over a stereo as attendees lit candles. At the end of the vigil 40 balloons were released into the evening sky, one balloon for every year since the abuse began in their school.

The vigil also honored deceased classmates, including Edward Blair, who classmates still call “Eddie.” He committed suicide in 1994, which friends attribute to the trauma of Merzbacher’s abuse and the stress of preparing for trial. Blair was among 13 students who filed charges against Merzbacher in the early 1990s, but died before his deposition was taken. Murphy’s case was the only one to go to trial; prosecutors decided not to proceed with the other charges after Merzbacher was sentenced to life in prison.

Another vigil organizer, Mary Lewandowski, was among those who pressed charges in 1993. “I think (the vigil) has given us a little bit of peace, but the threat of him getting out has brought up a lot of pain and turmoil and worry,” she said. “We’d like to be done with that.”

Murphy met with Archbishop William E. Lori June 1 to discuss Merzbacher’s abuse and efforts to keep him in prison. “I found him to be very kind and warm-hearted and genuine in his listening,” she said of the archbishop, who has signed an online petition to keep Merzbacher in prison.

Former students struggle to believe that the other school’s administrators and teachers were not aware of the abuse at the time, and many feel betrayed by them.

“It’s mind boggling to me that no adult, no teacher has ever stepped forward and stood on our side,” Murphy said. “Even if they say, ‘I didn’t see sexual abuse,’ they saw inappropriate behavior.”

Murphy said she hopes that the Catholic community will rally around their cause and sign their petition.

“We’re determined to continue to seek justice, that (Merzbacher) will never see the light of day, that he never harm another child,” she said.

Click on the arrows below to view a slideshow of the vigil.