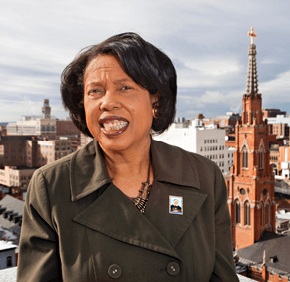 Therese Wilson Favors was caught by surprise in spring 1978, when Fathers Francis X. Callahan and John M. Sewell called to ask her to be the director of evangelization of Corpus Christi Parish in Bolton Hill.

Not sure what the position entailed, “I just played it off a little bit,” said Favors, who prayed about the offer for 40 days before accepting it.

“I was trained to be a teacher,” Favors said. “I got caught up in evangelization.”

Favors took that job, and moved on to others. Now, after 41 years of working for the Archdiocese of Baltimore, she is retiring at the end of the year, after being director of the Office of African American Ministries since 1993.

“This was the right time,” Favors said of her decision to retire. “I hope I have completed the assignment he (God) has sent me here to do.”

During an Oct. 31 interview in her office at the Catholic Center, on the eve of Black Catholic History Month, Favors was overcome with emotion several times.

“My life,” she said, “has such meaning because of the church.”

Favors attended the former St. Cecilia School in West Baltimore from first through eighth grade, and as a college student returned there as a teacher’s assistant. She taught at other archdiocesan schools, coordinated the Rosa Parks cluster of Catholic schools and worked for the archdiocese’s division of religious education.

While she earned a master’s in religious education from the Ecumenical Institute of Theology at St. Mary’s Seminary and University in Roland Park in 1988, Favors credits her parents – her late father, Thomas A. Wilson Sr., was a deacon – as her earliest Catholic teachers.

“You just gotta believe in God,” Favors said. “The vocation of a Christian is about transformation.”

During her tenure in the Office of African American Ministries, Favors is proud of an ad hoc group that helped to forge the office’s vision; the Africentric column in the Catholic Review; and programs such as “Keep on Teaching,” a ministry that engages catechists who serve in the black Catholic community, and “Operation Faith Lift,” a street evangelization and outreach ministry.

Monsignor Edward M. Miller, pastor of St. Bernardine in Baltimore, has known Favors for decades. He called her “a very wise and very gentle teacher and leader.”

“She has an ability to see goodness where other people don’t and I think it comes from her spirituality,” Monsignor Miller said.

Deacon Paul D. Shelton, who serves at St. Matthew in Northwood and Church of the Blessed Sacrament in Baltimore, said Favors “brings you back to the God center, that it is for the glory of God.”

“She tends to always try to point you beyond her to God and the reasons you are doing it for God,” said Deacon Shelton, who has known Favors for 26 years. “She always points you beyond her.”

In retirement, Favors plans to continue teaching a summer course at the Institute for Black Catholic Studies at Xavier University of Louisiana in New Orleans; spend more time at St. Cecilia, where she has been a lifelong parishioner; and help the Oblate Sisters of Providence “as much as I can.”

“God will have his way,” Favors said, “and that’s a gift of faith.”