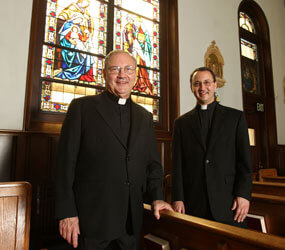 When Deacon Gregory Rapisarda’s wife of nearly four decades died of cancer in 2006, she left a note for her husband and four children.

“My love did not die,” Carol Rapisarda wrote, “only my body. Support one another and live the life God meant you to live.”

Deacon Rapisarda took his wife’s words to heart and prayed that God would show him what he was meant to do with the rest of his life. God answered by sending what the deacon called “promptings of the Holy Spirit.”

Friends began suggesting that Deacon Rapisarda would make a good priest – much like Father John Rapisarda, the deacon’s youngest son, who was ordained in 2008. Then, in May of that same year, Archbishop Edwin F. O’Brien asked to meet with the deacon.

“He looked at me and said, ‘Are you ready for the priesthood?’” Deacon Rapisarda remembered. “I said, ‘I’m afraid.’”

The more he thought about it, however, the more enthusiastic Deacon Rapisarda became. It wasn’t mere coincidence that people were asking him to think about the priesthood. It just might be God’s call.

Archbishop O’Brien will ordain Deacon Rapisarda to the priesthood June 12 at the Cathedral of Mary Our Queen in Homeland. The solemn 10 a.m. liturgy will make the Rapisardas the first father and son to share a priestly vocation in the history of the Archdiocese of Baltimore.

Father Rapisarda, associate pastor of Our Lady of Mount Carmel in Essex, will be present at the celebration, as will the deacon’s three other children. Deacon Rapisarda will then celebrate his first Mass at St. Margaret in Bel Air June 13 at noon – Father Rapisarda’s 33rd birthday.

“We’ve been very happy for him,” Father Rapisarda said. “We wanted Dad to know that we love him and we’re excited about this. At the same time, none of us had any pressure on him.”

An especially challenging part of the ordination will be making it through the litany of the saints – the moment when Deacon Rapisarda will lie prostrate in the sanctuary while the congregation chants intercessory prayers to the saints.

“I’m going to have two handkerchiefs,” said Deacon Rapisarda, who believes his wife will be among those praying for him at that moment. “I know that I’ll be crying. There’s no way I can stop that.”

Deacon Rapisarda, who as a teen had spent a year in Catonsville’s now-closed St. Charles Minor Seminary, has felt his wife’s presence throughout his journey. A convert to the faith from Methodism, Carol Rapisarda had taken seminary courses with her husband as he was preparing for the diaconate.

“The opening prayer of a funeral says that our death does not destroy the bonds of friendship you have made on earth,” said Deacon Rapisarda, whose diaconal ministry has been devoted to his home parish of St. Margaret. “I certainly know I have her support because she supported me throughout her lifetime.”

Faith has always been the foundation of the Rapisarda household. The family prayed the rosary together, attended Mass and practiced Catholic devotions.

“Our prayer time was fun and respectful,” Deacon Rapisarda said. “Going to church wasn’t something we thought about in addition to family life; it was part of family life. I think that what’s borne fruit in our lives.”

Deacon Rapisarda integrated that deep faith into his career as an elder-care attorney. He often visited people in nursing homes or met with families in transition to assisted living.

“It was very much a pastoral practice,” he said.

Asked which of the two Father Rapisardas would celebrate sacraments for the family, the father and son looked at each other and laughed.

“We’ll do it by rock, paper, scissors,” Father Rapisarda joked.

His father chimed in: “John gets baptisms and I get funerals.”

Deacon Rapisarda noted that when his daughter, Joanna, gets married in September, he will walk her down the aisle and then concelebrate the Mass with his son.

“Then I’ll spend the rest of the day being a father,” he said.
Click here to read a 2009 three-part series covering the seminary formation of Deacon Rapisarda and two other seminarians.