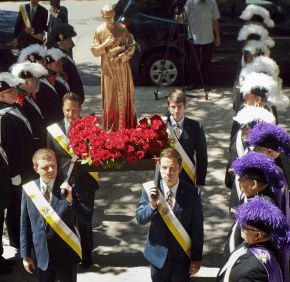 By Catholic News Service
NEW HAVEN, Conn. – The priesthood of Father Michael J. McGivney, founder of the Knights of Columbus, “models the teaching of recent popes,” said Archbishop William E. Lori.
“St. John Paul II said that the priest’s personality must be a bridge to Christ, and indeed Father McGivney’s unassuming, lighthearted-yet-determined character attracted many to the Catholic faith and to St. Mary’s Church,” said the archbishop, who is supreme chaplain of the Knights.
“When Pope Francis tells priests to acquire ‘the smell of the sheep’ and ‘to bring the Gospel to the margins of society,’ “ he continued, “I think of Father McGivney. He loved the priesthood deeply.”
Archbishop Lori made the comments in his homily for a Mass marking the 125th anniversary of the death of Father McGivney. The prelate also was principal celebrant of the Aug. 14 Mass at St. Mary’s Church in New Haven.
The church is where Father McGivney, a priest of the Archdiocese of Hartford who was ordained in Baltimore, founded the Knights of Columbus in 1882. He was an assistant pastor there when he gathered a handful of men in the church basement to start the fraternal organization.
Archbishop Lori, who spent the first week of August in Philadelphia at the Knights national convention, spoke of how the priest influenced those early Knights in embracing the organization’s principles.
“These men would not have committed to the principle of charity had they not seen in Father McGivney a man of tireless pastoral charity, who reflected God’s love through acts of personal generosity and compassion,” he said.
The men also would not have committed “to the principle of unity had they not seen how Father McGivney brought together the people of St. Mary’s Parish and how he served as a source of unity in the wider community of New Haven.”
The priest’s witness of fraternity also had an impact on those early Knights’ commitment to that principle.
“Father McGivney was not only the father but also the brother to his parishioners and indeed to anyone in need,” Archbishop Lori added.
The priest is a candidate for sainthood. The Father McGivney Guild was formed in 1996 to promote his cause; the Vatican approved opening the cause in 1997.
Father McGivney was declared “venerable” by Pope Benedict XVI, recognizing his heroic virtue. A miracle attributed to his intercession is under investigation at the Vatican. In general one confirmed miracle is needed for beatification and a second such miracle is needed for canonization.
Archbishop Lori spoke in strong personal terms about Father McGivney, whom he said he considers his “parish priest, the parish priest of my soul.”
“Every morning I pray to him and I pray that he be canonized, as I know you do. Every day I load his plate with all kinds of intentions,” he added.
Sixteen Knights formed an honor guard that led the processional and recessional at the noon Mass, and four Knights carried a 4-foot statue of Father McGivney. The statue and an original painting of Father McGivney were placed in the sanctuary during the Mass.
At the conclusion of Mass, Archbishop Lori was joined by Supreme Knight Carl A. Anderson, other supreme officers of the Knights of Columbus and John Walshe, a Bridgeport lawyer who is a great-grandnephew of Father McGivney, at the sarcophagus near the entrance of the church, where the remains of Father McGivney are interred. The archbishop blessed the sarcophagus with incense as church bells tolled, and then led the congregation in prayers for his canonization.
Based in New Haven, the Knights of Columbus has about 1.9 million members in the United States, Canada, the Philippines, Mexico, Poland, the Dominican Republic, Puerto Rico, Panama, the Bahamas, the Virgin Islands, Cuba, Guatemala, Guam and Saipan.
Copyright ©2015 Catholic News Service/U.S. Conference of Catholic Bishops.

Pope thanks Knights of Columbus for prayers, solidarity