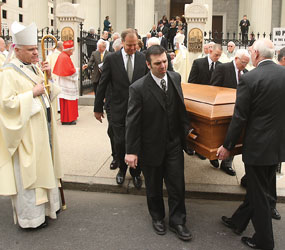 They knew Sulpician Father Joseph C. Martin, co-founder of the addiction treatment center, was in ill health and they hoped to see him one last time.

“They wanted to say, ‘Thank you for saving my life,’ ” recalled Father David M. Carey, speaking in a March 13 homily at Father Martin’s funeral Mass held at the Basilica of the National Shrine of the Assumption of the Blessed Virgin Mary in Baltimore.

“He reminded them that the life of every human being was no mistake,” Father Carey said. “God had wonderful plans for each of them.”

Hundreds of people from across the country, including recovering addicts, filled the basilica to near capacity in tribute to a man Father Carey called a “wounded healer.”

Father Martin began his recovery from alcoholism in the late 1950s after a stay at the Guest House, a clergy alcoholism treatment center in Lake Orion, Mich. The Baltimore native went on to devote much of his priestly ministry to helping others who faced the same challenge.

Working with Mae Abraham, a woman he met in Alcoholics Anonymous, Father Martin opened his treatment center in 1983.

Father Carey, a retired archdiocesan priest, recalled that his friend once told him that all he wanted to do was “fix a few drunks.”

“Joe is saying, ‘not too bad for a little guy from Hampden,’ ” Father Carey said.

Over the course of his ministry, Father Martin made more than 40 motivational films and wrote several publications.

More than anything, Father Martin loved being a Sulpician priest, Father Carey said.

“He was a priest to the very end,” said Father Carey, noting that Father Martin shared kind words with a group of dialysis patients not too long before his death.

“He was one of those unique individuals who had only friends,” Father Carey said.

Father Thomas O. Ulshafer, provincial superior of the Sulpicians, remembered that Father Martin asked him to speak about his priesthood at his funeral Mass – a liturgy that was celebrated in the same basilica where Father Martin was ordained for the Archdiocese of Baltimore in 1948. He entered the Sulpicians the following year.

“It was a very Sulpician request,” said Father Ulshafer, pointing out that the Sulpicians are dedicated to preparing men for the priesthood.

Father Martin spent the early years of his vocation working with high school students who aspired to the priesthood at St. Joseph’s College in Mountain View, Calif., and St. Charles College in Catonsville.

Father Ulshafer said his friend told him that dozens of priests were among the tens of thousands of people who received help with addiction through his treatment center.

In closing remarks, Archbishop O’Brien said Father Martin was a man who “turned a cross into new life.” Looking into the congregation, the archbishop noted that he saw many tears – “tears of hope and tears of joy.”

“If Joseph Martin has not earned heaven,” Archbishop O’Brien said, “I don’t think any of us have a chance.”

As mourners exited the basilica to the solemn tolling of a bell, many recalled that Father Martin was a man who genuinely cared for others.

Jim Murray, retired general manager of the Philadelphia Eagles, told The Catholic Review that Father Martin was “the ultimate miracle worker.” The life of one of Mr. Murray’s closest friends was “saved” through the Father Martin’s Ashley treatment center, he said.

“He was a man with a totally sincere heart,” Mr. Murray said.

Ellen Wagner, Father Martin’s niece, recalled that as an infant she received Father Martin’s first priestly blessing after his ordination. Throughout his life, he constantly told jokes and tried to cheer others up, she said.

One of his favorite jokes, Ms. Wagner said, involved a drunken man who kept a penguin on a leash at the park. As the joke goes, a police officer ordered the man to take the bird to the zoo where it belonged. The next day the officer saw the man again with the penguin and asked him if he had taken it to the zoo. The man said he did and today, he’s taking the penguin to the library.

“He was famous for telling that joke,” said Ms. Wagner with a laugh, noting that a small figure of a penguin was built into one of the stained-glass windows at the treatment center in Father Martin’s honor.

“Someone also put a little penguin in his coffin,” Ms. Wagner said. “He would have loved it.”