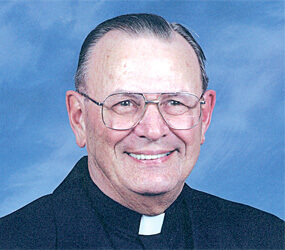 Father Joseph F. Kitko, the former pastor of Resurrection of Our Lord in Laurel and an indefatigable worker even in retirement, died July 22.

Father Kitko, 80, had a history of heart trouble.

Born and raised in East Baltimore, Father Kitko was the pastor of Resurrection of Our Lord from June 1971 to May 1999. He was pastor emeritus of the parish in western Anne Arundel County, which had been established just three years prior to his arrival.

For much of Father Kitko’s tenure there, his pastoral associate was School Sister of Notre Dame Ann Elizabeth Hartnett. He befriended her family, which included Monsignor Robert L. Hartnett, a nephew, who is the pastor of Our Lady of Mount Carmel in Essex.

Retiring a month after his 70th birthday in 1999, Father Kitko resided at the Mount Carmel rectory on Old Eastern Avenue the last decade.

Three days prior to his death, as the parish observed the Feast of Our Lady of Mount Carmel, Father Kitko gave a typically homespun homily at 7:30 a.m. Mass. It included an explanation of how homiletics was taught at St. Mary’s Seminary and University in the early 1950s.

“Before Father Joe was getting ready to retire, he called and asked if he could live here,” Monsignor Hartnett said. “He wanted to continue to do pastoral work.

“He had a great pastoral sense of people’s needs, was very responsive to people in distress. He was a very compassionate man, and a hard worker. He came here as a retired priest, but took a regular rotation for baptisms, confessions and funerals.”

Monsignor Hartnett estimated that over the last decade, approximately 300 Rite of Christian Initiation of Adult candidates at Mount Carmel had been taught by Father Kitko.

From Easter to Advent, Monsignor Hartnett said, Father Kitko split time between Mount Carmel and a farm near State College, Pa., that he had inherited from an uncle.

“He enjoyed manual labor, and didn’t mind getting his hands dirty,” Father Hartnett said. “At Resurrection, he coordinated the upkeep of the church.”

Father Kitko had lost the tip of his right index finger in a farming accident.

Those hands had given Father Kitko career options other than the priesthood, as Monsignor Hartnett said that Father Kitko’s pitching renown drew the attention of professional baseball scouts.

Father Kitko attended the grade school at St. Brigid in Canton, and St. Charles high school and then its college. He was ordained at the Basilica of the Shrine of the National Assumption of the Blessed Virgin Mary on May 28, 1955.

“He was an interesting mix,” Monsignor Hartnett said. “He was extremely faithful to the priesthood and to all of the church’s teachings, but at the same time was a very open-minded person.”

When Father John Rapisarda announced the passing of Father Kitko at 10 a.m. Mass July 26 at Mount Carmel, there was an audible reaction from the congregation.

Father Kitko will lay in state at Mount Carmel from noon to 9 p.m. July 27. His funeral Mass will be celebrated at the church July 28, at 11 a.m.

In lieu of flowers, his family asked that donations be made to a memorial scholarship fund in his name that is being established at Our Lady of Mount Carmel.